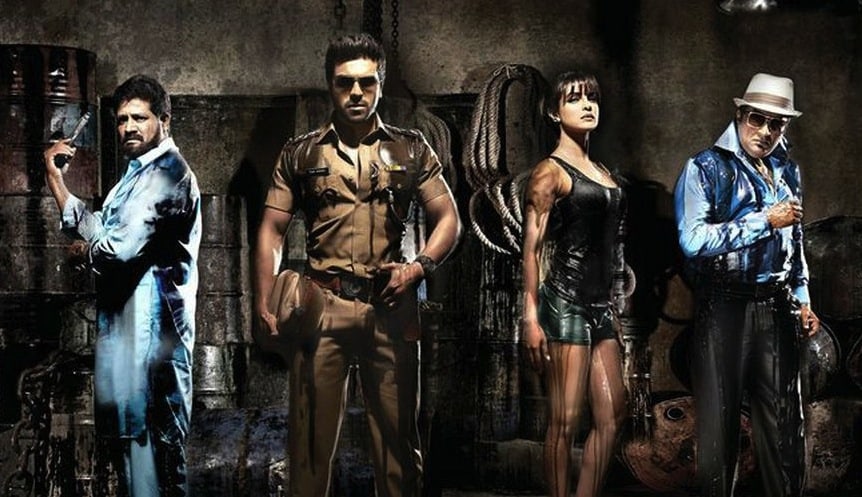 Amitabh Bachchan at his most primal was what the old Zanjeer was all about. This remake is all about unwarranted fighting scenes (sorry, I can’t call them action sequences). “Investigations start karo,” says the hero, a second before cops start whacking everyone in sight. You need to remember that the parent movie also didn’t have a great storyline, the performances and the dialogues were what gave an outstanding ovation to Amitabh for which he is remembered today too. Maybe, that was not what Apoorv Lakhia wanted to do. Ram Charan makes his Hindi film debut and how!

Zanjeer (English: Shackles; titled Thoofan in Telugu) is an Indian U/A certified action film directed by Apoorva Lakhia, shot simultaneously in Hindi and Telugu. It is a remake of the 1973 Hindi film of the same name.

Cop Vijay Khanna (Ram Charan) despises the Indian police system and like every other loyal cop wants to fight against corruption. Sher Khan (Sanjay Dutt) is his local thorn. He reaches Mumbai, don ka sheher where the torture starts. Meanwhile, somehow, he meets his dream girl who is the key to all the unlashings and conspiracies – Mala (Priyanaka Chopra). Dude, the story of 1973 hasn’t changed much. Teja (Prakash Raj) and Mona (Mahie Gill) play out the Teja-Mona-darling chit-chat.

Writer Chintan Gandhi trashed a good movie with bad acting. The only positive from Priyanka Chopra’s performance in this film is that she hasn’t dragged in Pitbull. She spells joie de vivre and looks gorgeous, even though she has faked her dialogues and she acts silly through most of it. The hero and the villain just love to scream and shout. That isn’t bad but its senseless, now senseless shouting is going to be a problem in the long run of some apparent 2 hours, no? Ram Charan shows some inscrutable expressions, strutting around like he is a don more than a humble pie cop. If there’s anyone worthy of mention it is Sanjay Dutt, who effectively takes on Pran’s khol-smeared Sher Khan with gusto. Even Atul Kulkarni is robust as an earnest journalist. The boost point for this movie is its momentum. It’s well done. Neither the actors nor the script ever lose the momentum, which is fast and furious. There is an elaborately staged multiple-explosion sequence in a huge Dharavi-like slum which belongs to a Vin Diesel-starrer and so many of them, so you can be engaged in gauging how they created so much smoke.

Remember, shoot out at Lokhandwala? You shall get that ‘bhai feel’ while watching the sequences. They are as fast as the advancement of the story. “Mumbai ke hero” is Teja-ed. Pinky and Kaatilana are typical cop disco songs.

Ram Charan had been expecting a blast in Bollywood. If you are a fan, don’t disappoint him. This one has worked, whatever the result maybe. No one can do to the sullen cop’s role what Mr.Bachchan did. So, you can go to the screens for witnessing a transformation. Maybe I shouldn’t be so hard on remakes, and if it doesn’t do the same – you will get a ‘feel’ out of this remake. It will blast your day with some carnage and piranha. RATING: 2/5