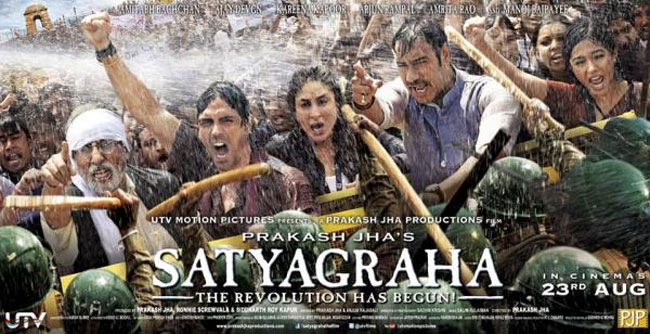 After Arakshan, Rajneeti and Chakravyuh, I knew exactly how this Friday lady was made up. Jha is known for his patriotic themes with lots of political drama and the darker sides of education, elections and the police system. There were some scene which were so perky and zesty that you could almost take part in that regional elections and show the world how much you can change. And then there were some scenes so repetitive that you could just pray for them to pass out. The moral of Jha’s story is full of empathy and the length of the movie always makes you wonder “how much can be too much?”

This is a tell tale. Where the fictitious characters have been given life through their signature famousness more than the quality of role they play. Amitabh Bachchan (Dwarka Anand) is a Gandhian school teacher who is heled limb and lane by Arjun Rampal (Arjun), a student leader. While, in comes Ajay Devgn (Manav Raghvendra) as an ambitious, wily, businessman-turned Satyagrahi , the struggle to get noticed by the gandhian concept is completed by the fourth player – Kareena Kappoor (Yasmin Ahmed), a journalist-turned Satyagrahi. The movie is a puppet show of modern day Anna hazare. (Yet again!)

The biggest thing to happen to any Prakash Jha movie is the star cast. The best part of the movie is the performance, which is guaranteed concerning the fact that the stars have really worked for it. While, Devgn looks drowsy and not so happening, Amitabh has proved that he can act better than any other 20 and 40 something even at 70. Arjun Rampal could have done better. The strolls in gardens are pretty much boring and too historical.

Kareena Kapoor’s TV journalist is all over the place. Strangely, at times she is the only journalist shown to be covering the “revolution” that engulfs the streets of Ambikapur as the 70-year old Anand slaps the district collector and gets arrested for taking on the wily Balram Singh (Manoj Bajpayee) and the system. The take on the big names by small people and the “enough is enough” platter is served brilliantly by the actors but with a tinge of boredom as these things, imma-saw-before-so-many-times. Manoj Bajpayee is always a thrill to watch. He catches on the nerves faster than others here though, his jokes are outdated yet his corrupt politician act is fresh as a tan door in oven.

The background music is bearable; and the supporting actors will never get noticed. The script is sad but twisty.

A big fail. Anybody will be disappointed. You can’t have “janta rocks” with janta and rocks in the same sentence and with lyrics so dull that you don’t want to wake up again.

The show must go on is the motto of the movie and that is what it does. You will love the scene where the public outrage is shown. Where the number of heads diminishes, so does the interest. Watch the movie for the stars. Get patriotic and aware, all over again with this flick. RATING: 3/5