Since the 2010s, there has been a progressive “trend” in Tamil cinema, where a handful of sensible films portraying the lives of the oppressed people have been made. And the pleasant scenario where such movies are not just acknowledged but celebrated is a delight to our hearts. This change in sensibility is undoubtedly due to the genius arrival of Pa. Ranjith. But the race against the bigoted system is not over yet. After all, this is not a race; this is not even a marathon. It is a never-ending relay race of sorts! Movies like Pariyerum Perumal and Karnan by Mari Selvaraj, Asuran by Vetrimaaran, and Irandaam Ulagapporin Kadesi Gundu by Athiyan Athirai were all brilliant efforts to showcase systemic oppression and the uprising against it.

This is all the more reason for the filmmakers to make a movie for the masses. At this critical juncture, comes the movie Jai Bhim, starring Suriya as a communist lawyer crusading for the rights of the oppressed and the voiceless.

Casting Suriya as the protagonist of the movie could have jeopardized the cause of the script. But the director Tha Se Gnanavel diligently wrote the character and extracted one of Suriya’s most nuanced performances of all time. The secret is avoiding the roaring Suriya we know from the “Singam” movies and opting for subtlety. On the other end, the jarring energy and needless background music by Sean Roldan may bully your ears from time to time. His album is soulful as usual with intense lyrics from Yuga Bharathi, Arivu, and Raju Murugan.

Casting in the movie was on-spot. Actor Manikandan takes on the character of Rajakannu – who is falsely convicted and imprisoned for alleged theft. Manikandan steals the show by displaying his raw acting skills and taking the audience in his shoes. In terms of performance, Manikandan was well-complemented by Lijomol Jose who played his wife – Sengani. The character had so much weight to it but was efficiently translated by Lijomol. Unfortunately, the makeup for her was not up to the mark and was patchy throughout the film. There are a dozen other crucial characters spread across who played their part flawlessly.

Right from the start, the director shows his unflinching intent to portray what he feels is right. The ugly reality of false imprisonment and discrimination on basis of caste might surprise the urban elites in the audience. But it is yet another day in the enduring lives of Irular tribes – one of the oppressed landless communities spread across Tamil Nadu and Kerala.


Also, this is not the first movie about police brutality. Movies like Visaranai were well-received critically and commercially. But Jai Bhim sheds further light on the issue by analyzing the reason for the discrimination – which is caste. Apart from addressing the issue, the director shows the effective tools by which we should combat systemic inequalities – Ambedkarism, Marxism, and Periyarism.

The director is confident about the politics that he has spoken about in the movie. The reason is quite simple – it is the truth. The movie is based on real-life incidents that happened in 1993. In the now-famous Rajakannu case, political intervention and support were offered by Marxist Communist Party’s comrade Govindan. Starting from rallying supporters for the cause to collecting funds to move the legal case in the high court, comrade Govindan has been an integral part of fighting for justice. Justice K Chandru whose role has been played by our protagonist is a seasoned lawyer turned judge who has authored books based on his experiences. During his time as a lawyer, he has handled thousands of cases for the marginalized and the poor without charging any fees. Jai Bhim did not compromise on the real-life heroics of the comrades, and at the same time, did not portray them as saviours of the downtrodden. Manikandan and Lijomol’s characters were written with utmost care and dignity. The scene where Sengani snubs the police and chooses to head home by herself exhibited the resolve and conviction of a woman filled with self-respect. The whole sequence was nothing short of goosebumps.

The injustice unleashed upon the Irualars (or any oppressed communities) is something that cannot be captured within a couple of hours. The graphic violence in the movie is not for the soft-hearted, but it’s a shame that folks who choose to ignore the movie might end up turning a blind eye to real-life atrocities. The mere gesture of watching this movie is a formidable stance by educating ourselves about the graded inequality and violence set on fellow beings.

The director sneakily yet consciously filled the movie with references, symbolisms, and dialogues that criticize the ugly politics played by casteist forces – be it the sub-inspector, the village president, or the public prosecutor, among many.

In one of my earlier articles, “Karnan (2021) Discussion: Do We Need More Films Like This?”, I argued that films that bring about a healthy discussion on these controversial topics are needed. I restate that it cannot be ignored. Not any further. Unfortunately, as a counter, we will have to endure pro-casteist movies like Draupathi or Rudrathandavam. We do not have anything to worry about these for two reasons. One – they are poorly written, hate-filled scripts that are executed terribly. Although they might’ve baited the ill-informed ignorant bigots of society, these movies will not last long in people’s minds. Two – as cliched as it sounds, I would like to quote Chandru’s line, “the truth will triumph“.


Jai Bhim – What a powerful word it is! For people who have no idea about the significance of the emotions that the word carries, perhaps the movie would give a glimpse. The movie, without a doubt, has stirred the political landscape. This yet again proves how powerful the visual medium is. With the right approach and responsibility, films like Jai Bhim can (and will) have a positive impact on our society. Jai Bhim! 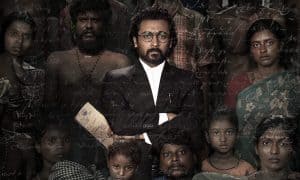