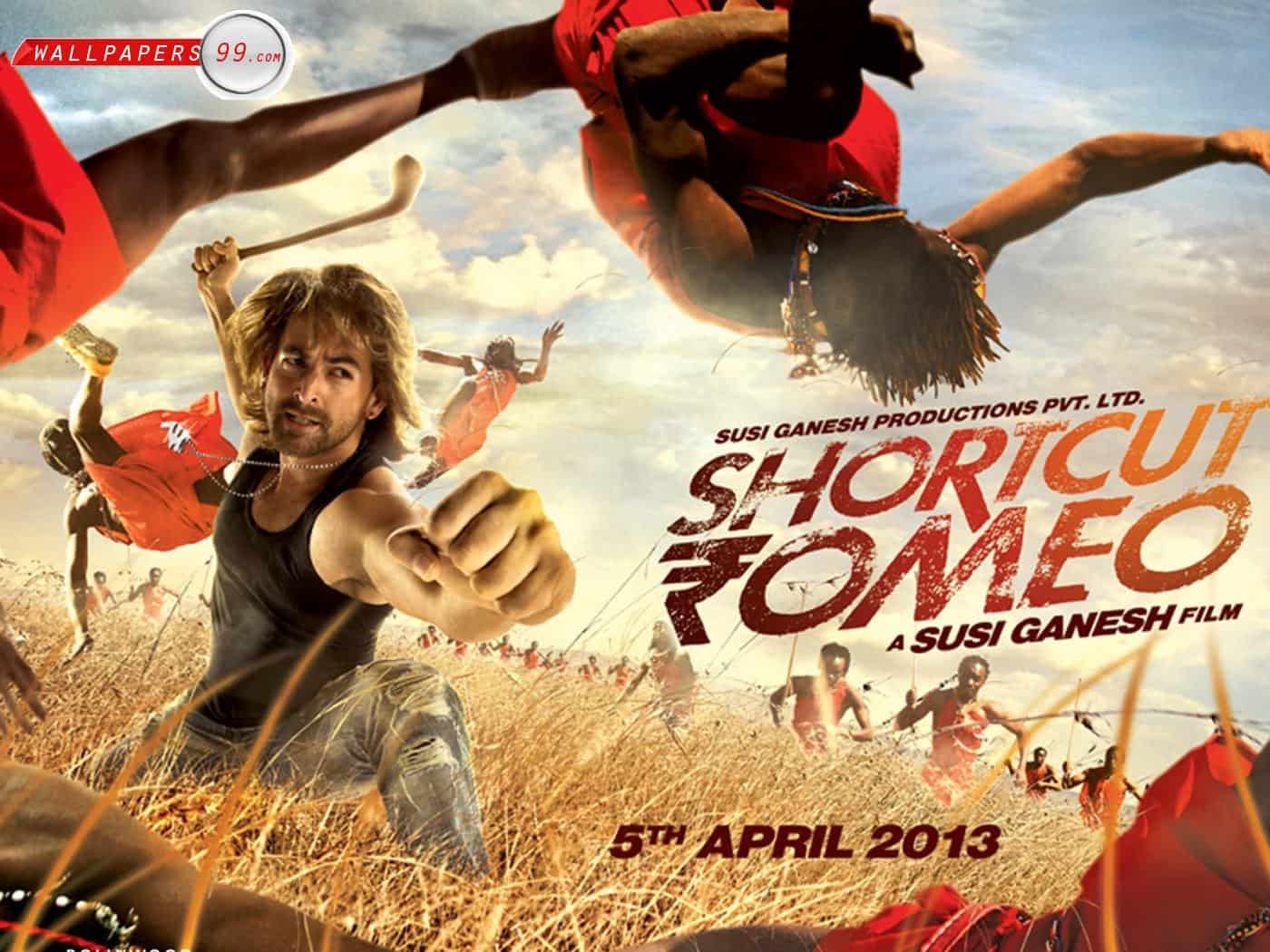 Ever watched a spoof which touches your heart with its romance and bundle of joy cinematic expressions? Then there is lovemaking on the golf turf with lame ass lines thrown in with loads of senseless talks… then there is a traditional not-your-run-of-the mill tycoon with a cheating wife who wears Bali and talks qwaali.

Shortcut Romeo is an Indian romantic thriller film to be directed and produced by Susi Ganeshan, under the banner Susi Ganesh Productions. It is the Hindi remake of the director’s own Tamil film Thiruttu Payale (2006), starring Neil Nitin Mukesh in the title role with Puja Gupta as his love interest and Ameesha Patel in a negative character.

A cheeky handsome new age blackmailer who is the hero and then you have songs with trees and locations which put Race 2 in race and then black women with shimmer and glamour, one of the first instances where Bollywood has accepted duskiness on same par with fair croissants from France … how cool could it get? And let me reframe the question, how cool it wouldn’t?

Remake of Thiruttu Payale, a Tamil movie. The movie didn’t live upto its expectations. Shortcut Romeo is basically better than its parent inspiration! Monica (Ameesha patel) is a cheater-c***k, as they say. Cheating on her hubby (Rajesh Shringarpure) with all passion and lazeez. Suraj (Neil Nitin Mukesh) blackmails her and dreams big. He then goes to Kenya for a funky trip and meets his love at first sight.

Neil is a handsome package. And Ameesha is well, Amish-aa! She should stop it. Really. Acting. Then comes our newbie hottie in town, Puja Gupta, the Ex-Miss India, well, she has been so good so far. and puts up a hot dance every time she shows up. Then there are the ‘other’ actors.. Like the cheated-on hubby, where you feel bad about him and you hate a wife like that. Cheating has been comical all these years in Bollywood, but this spoof immaculate a hate towards people who cheat with flair.

Himesh Reshammiya does pretty good comeback (was he ever gone???!) but then again, songs are just fill in here.

The cinematography is a fight. But apart from that, the direction is seriously extravagant with all the meat and cheese for an ultimate Masala thriller. Also, the crux of the movie is the Kenyan trip which stands out from the usual locations like Swiss Mountains and London Bridge. Also, the childhood scoop into Neil’s life is exciting. 😛 I liked the acting of Neil, to my surprise but hated the pairing of Gupta and him. They look cute and all but there is some love lost. Ganesan’s stylish shocker of a thriller manages to stay constantly one step ahead of the audience. The director also shows up as a detective in other half of the movie which is just so lame. 😛

Overall good but pretty lax. Suffice it to say, I wasn’t feeling very smart when I left the theatre after two and a half hours of this drivel. But who knows? Maybe you had like it more? Or maybe not? 😀 RATING – 3.5/5