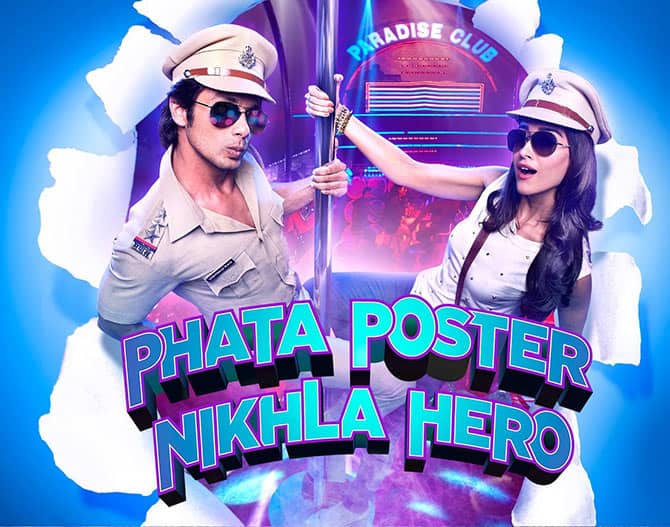 The Wikipedia states the English translation of the Hindi title as, Poster Rips Open and out Comes Hero – which I had say is funnier than all the gags put together in the movie. 😛 Salman enters like a summer breeze and leaves us breathless. All the while, only a true heart and mind sworn Shahid fan can enjoy this movie like anything.

Vishwas Rao (Shahid Kapoor) dreams of being a famous hero one day. However, his mother (Padmini Kolhapure) is an honest, auto-rickshaw driver who wants her son to be a good cop due to certain turn of events, the Mumbai police as well as goons start believing that Vishwas is in fact a police inspector. Then stats the web of lies and deception, all the while the movie explores the mother-son duo relationship. Juggling between this is his love story with Kajal (Illena D’Souza), a social worker whose sole aim in life is to register FIRs against wrongdoers.

The best actor in the movie was the Maa. She was perfect. Vishwas Rao isn’t Chulbul Pandey or Bajirao Singham and neither is he anything like Bahattar Singh. He is a happy go lucky dreamy guy who loves his mother like a dutiful son. The jokes and one liner get boring after a while and Shahid’s charms wears off, there Padmini saves the show. There is no chemistry between the lead pair and maybe because romance isn’t why the film has word like “phata” in its title. All the other supporting actors barely get noticed and the choreography is well done while the screenplay sucks. The script writer should take a sabbatical and the director a smoke. The sets are beautiful and so, when you want to marry in a well to do stage, call the guys up.

The dance sequences are applaud able and the way Illena’s waistline moves to the groves, you had appreciate the importance of music in a movie for the first time as an attempt to like the actress. “Tu Mere Agal Bagal Hai”, “Dhating Naach”, “Janam Janam”, all the songs have a different tune to it. Sets the mood.

It’s another run of the mill movie. The film tries too hard to impersonate both Andaz Apna Apna’s flaky sense of humour and Ajab Prem’s loony energy but cannot conceal its urge to include a dated brand of soppy sentiments. Rajkumar Santoshi fans and Shahid’s allurement can make moviegoers like this movie. Though I wonder how much. 😛 RATING: 2.5/5