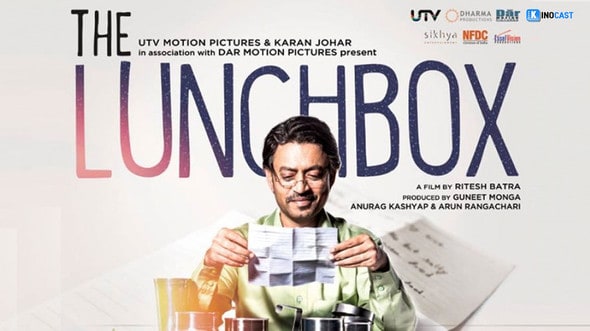 How many times have we not seen the heroes brag about their superpowers and their sense of humor or aukaat. Well, this movie glides past the gem instead of dwelling and welling on it. This is one particular movie which doesn’t requires a review because I believe that a review should carry pros cons, a balanced and unbiased angle on the various factors which goes into the making of a movie. Fortunately, I couldn’t find a single flaw. Its flawless cinema.

The Lunchbox is an Indian epistolary romantic film written and directed by Ritesh Batra, and produced by Guneet Monga, Anurag Kashyap, and Arun Rangachari.

Saajan Fernandes (Irrfan Khan) is a middle aged, living in the reality, office goer whose life is simply the boredom-at-its-best life. One fine day, instead of the gloomy everyday food which he pays for, he finds in his dabba, homemade goodies which at the moment are heaven for him. There is homeliness and abandon of loneliness with that smell and taste in him. His abhorrence for human interaction hilariously contrasts with his assistant’s (Nawazuddin Siddique) over-friendly nature. Watch the rest, for the story of dabawalla’s is rest assured most interesting.

Looks didn’t kill and acting did – that Irrfan Khan for you. Very subtle and at his best. There is believability and maturity to all the characters in the movie. Nimrat Kaur has played her housewife character with flair and precision. There are scenes where the characters are at their most human. The movie is slow when it comes to conversations but still, the director holds in the story pretty well. The uncanny resemblance with “The Shop around the Corner” and “You’ve Got Mail” are obvious but unwarranted: the letters exchanged in “The Lunchbox” are less conversational, more confessional. The dabba is the hero here and the actors are its promoters. Batra the conventional director who is going to soar high after this movie, has also written The Lunchbox, has allowed his smashing actors tremendous room to improvise and come up with their own aura.

We don’t need any.

The dabbawala’s deliver and the director deliver relentlessly too. Indian cinema is undergoing a renaissance and you got to witness it. I would have bejeweled my rating with 5/5 but I wanted a better ending I guess. RATING: 4.5/5