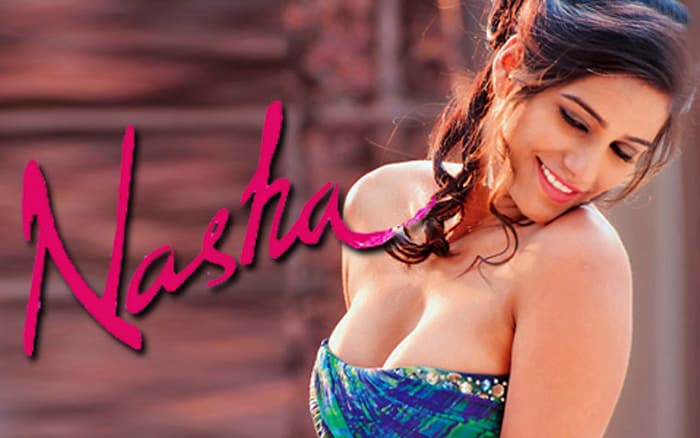 Poonam Pandey is the newest Rakhi Sawant in town. (Wonder what happened to RS!) The storyline of Nasha is amazingly well done. We have heard, seen it before, some might have even experienced the emotional uphill when love is mixed well in lust and vice versa.

The movie tries a different approach of more lust, less love. This is why it fails in its accomplishment to cracken the ‘sensibility’. Instead provides Bollywood erotica in boldest form.

Anita (Poonam) is a high school teacher (we never see her in class!) who becomes the object of 18-year-old Saahil’s (Shivam) obsession. Rest you know better. 😛

I have been waiting to write about Poonam Pandey’s acting prowess after hearing she did a movie! I can’t imagine this girl in a non-sexual role where she wears a saree without showing cleavage or where she teaches and imparts education more than seducing a young guy in his dreams. Poonam Pandey has lot of sensation but it goes against her in lot of scenes where she tries to mix her sensuality with emotions. Which by the way, she is bad with. The director tried to give a direction to her role, which required grooming in terms of portraying something sexually gratifying, but I guess he failed there. She builds up herself as a poor actor in the first half by the end, she disappears in the shadow of her co-actor, who surprisingly looked and acted like a pro.

The actor, Saahil has done a commendable acting though. As a teenager he has played the youth just right. He punches his lines and jealousy at the right time, right instance. The friend circle of Saahil proves to be the saving grace of Nasha. All other actors, not many as to say have done an average job.

The best part of the movie. Even though listening the songs on Gaana.com is better than watching them. ‘Goti song’ is like ‘Har ek friend kamina hota hai’. Awesome! And besharam is very well done. Melodious. The film has its share of abusive language but there are also moments of tenderness, love and heartbreak captured brilliantly.

Youth and hostel life has been showed in a different lime light. a well done mixture of shamed jokes and dirty looks. The modus operandi of achieving your crush’s attention and thinking of your future together is tried well by the cast and the director. A bold attempt but this movie is going to be not a success, you slowly realize. Acting has been shamed, you see.

Don’t fall for this act. For people who don’t like PP, watch this and you will hate her more. As for asking to watch you the movie, it shall be only for the swift and natural acting done by Shivam, the male lead. RATING – 2.5/5