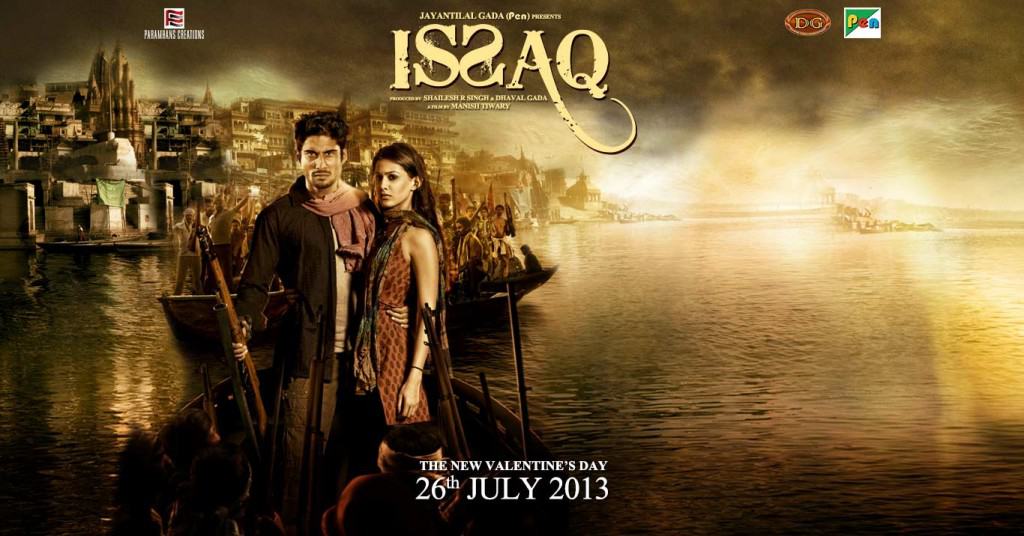 Pratiek had been such a delight to movie goers with his role in ‘Jaane Tu Ya Jaane Na’. A good movie, and not a movie which grosses bucks or distinguishes itself, but a sincere decent movie is what we need these days when it comes to the genre of romance. Somehow, during the signing of the movie, I am sure, the lead actors might have been made to read ‘Romeo Juliet’ and asked to imitate them. Varanasi is spoiled in the movie.

Issaq is a 2013 Hindi Romance film directed by Manish Tiwary and produced by Dhaval Gada and Shailesh R. Singh.

The story is simple and flawed. Ramaiyya Vastavaiyya is a betterwatch anyday! Somehow imagination seems to run a mock when you know that Maoists have started getting interested in Varanasi as well and are making your hero run all over the city, in the worst run (now every run shall be compared with Farhan Akhtar’s BMB) without any reason.

Two families, Kashyap and Mishra who are more like Capulet and Montagues from Shakespeare’s Romeo Juliet. Bachchi (Amyra Dastur) and Rahul (Pratiek Babbar) meet at a Holi party after which the Casanova of Varanasi has eyes only for the pretty luscious Bachchi. The Kashyaps and the Mishras are in the business of capturing Benares’s ghats. They are also in the extremely profitable business of sand smuggling. Then enter all the villains in all forms Bollywood has ever produced. Then its all about the fight of two lovers against the world. (Whichever world that story is from!)

One thing is sure after this – Dastur will get modelling assignments and Pratiek is back to ground zero from here. I never understood why make movies and put your heart in something so rubbed-off. While, as a debutante she was not as dashing as other actresses in last two years, who make a mark with their first movie… but maybe she will last in Bollywood longer than some one-time hit heroines did. Sudhir Pandey is like a chewing gum, it gets tasteless after a while. Ravi Kissen has been bloated on the wrong lines. The only actor who felt giving some sense was Rajeshwari Sachdev. The direction is bad. The screenplay is something not to look forward to. The set and the length of the movie go unnoticed.

There are lovemaking scenes, which will make you feel disgusted at the thought that nowadays sex can also not replace a decent storyline. The best part of the movie is the ‘Pyaar hua ikraar hua’ scene wherein, the sweet doe eyed Dastur declares that she is a virgin. And Babbar cannot believe that he has just been proposed! Yes, that was one hell of a proposal or what it looked like, because that is the redefining moment for both the youngsters.

The music is petty YRF nostalgic kind. if you listen the songs more than once, you will like it. Something positive.

Not a movie to waste a monsoon weekend on. Unless you live under the open sky and need shelter for 2 hours or lump sum and you think the theatre will do good enough and end up watching this movie 😛 RATING – 1.5/5