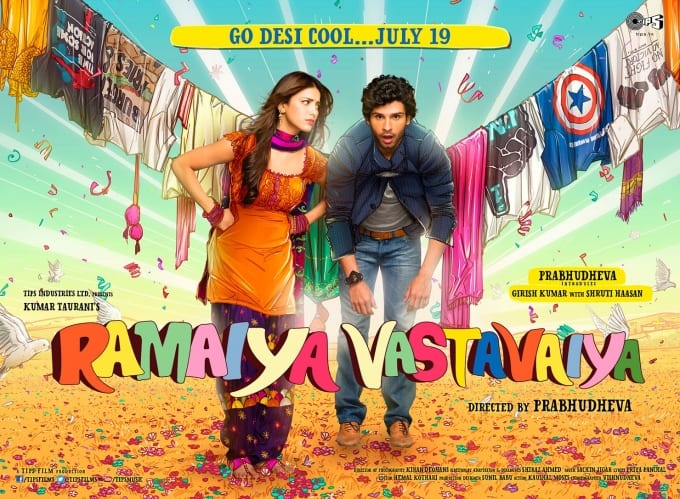 Prabhu Deva has indulged himself fully in the making of a romantic drama, which is sweet and fairy-tail-ish. Telugu film “Nuvvostanante Nenoddantana’s” remake seems more like on the line of ‘Jab Pyaar Kiya Toh Darna Kya’. “Ramaiya Vastavaiya is a romantic film. It has a lot of emotions and a lot of family elements. It’s a wholesome family film. There is brother-sister love, father-son love and love between a boy and a girl,” Girish Taurani said during an interview. Ah! Well, that is there. But, an overdose for people who have seen too much i-don’t-care attitude movies.

A poor girl Sona (Shruti Haasan) whose farmer brother (Sonu Sood) can go to any length to keep her happy, happily sends her to her best friend’s wedding and during the course of her 15 day stay falls head over heels in love with her best friend’s cousin from Australia Ram (Girish Kumar). When the elders find out about the ‘impossible’, all hell breaks loose and Sona is accused of ‘giving the net’ to the rich ‘fish’.

Shruti did better in D-Day then in a movie where she had most scenes. And nobody can beat Amrita Rao. Ever. The length lovers can go and how the society views a relationship between poor-rich is shown in a manner which we have seen before. In lot of movies, actually. So, the direction and the supporting actors just get too old and feverish after a while. Poonam Dhillon as a mother was highly associable. Paresh Ganatra who plays Bijli – walks away with the cake for his comic timing. Sarabhai v/s Sarabhai fame Satish shah was fresh too. Like always.

Sachin and Jigar have given an umber urban feel to the audience with an awesome set of tracks. “Peecha chutha” is groovy. Item number “Jadoo ki jhappi” ends the album on a peppy note. “Jeene laga hoon” was the best of all.

The songs are pure Bollywood. The village is so like the one you belong to. The marriage is almost lovely. But the story is stale. And why not? The same old, same old. There is a sense of disconnect between the first and second half. There is deviation which just reaches limit, like Sonu’s introduction through a lengthy narration and the not-needed-just-to-spice-up MMS leak.

Watch this movie only if you were swayed by its music and the versions from which it was inspired. RATING – 3/5