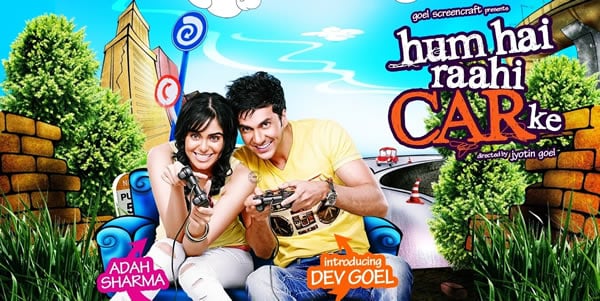 With Mere Dad Ki Maruti, which was an exceptional success, another movie having a four wheel name tag is on! On like King Kong! 😉 With Sanju Baba behind bars, he completed this movie in time, or else this movie might have released late, late like Ishkq in Paris.

Hum Hai Raahi CAR Ke is a series of comic misadventures, pulse-stopping action and just plain lunacy make a routine journey into an unforgettable barrel of laughs and an experience of a lifetime.

Shammi Suri and Priyanka Lalwani, 2 besties decide to drive from Mumbai to Pune to attend a friend’s wedding in the morning. What’s meant to take not more than 3 hours stretches to a chaotic New Year’s all-nighter. Where they have to encounter fun as much as adventure. Rolled in like bacon in butter. Dealing with a hard boiled inspector (Sanjay Dutt), avoiding Shammi’s boss (Chunky Panday), handling a lunacy injected doctor (Juhi Chawla), rumbled up and crumbled by wild things, being held up by masked bandits, and after all – falling in love. I had to say, cute as well as comical. But the cuteness takes a drain somewhere and the comical strip still endears.

Sanjay Dutt was so different and the vardi this time wasn’t a cause, but he was the cause for the vardi. The chic looking mad doc, Juhi managed to pull a cameo. Chunky pandey was realistic as well as ideal for the role. And now talking about the star of today’s comic strip – it had to be Anupam Kher. While I want to say a lot about the leads, Adah Sharma and Dev Goel, I won’t. You need to take your ass to the screens and decide for yourself if this two are going to survive the race in Bollywood or disappear like many. Jyotin Goel managed to get the right angles for the right strip and he made a movie so predictable yet wanting, that you had simply smiled while you feel how it would be if you were in Shammi’s place or in Priyanka’s phase. Adah Sharma is a marginal improvement from her male counterpart.

I had reasons to wonder if ‘Hum hai rahi pyar ke’ had anything to do with it, except the name part. Luckily not. Maybe in future, people had compared this movie with another ‘hum hai rahi…’ but with a withered promotion, a laid off story and a new cast with almost no publicity, the movie is a risk to its producers. It might do well, real well, but as far as the direction goes, that is, snooty, I had bet that it won’t. 😛

Garnished with bizarre rococo music, you had better not go there. 😛 One of the persons sitting in front had said to me, “No good songs, no?” in response I said, “Not heard on Gaana.com or radio, and the movie’s still left… so, lets see”. 😛

When I say, ‘comical ride’, I mean a bit messed up. The story starts off well, so the characters have time to introduce themselves throughout but it slacks slowly like an unknown poison from 17th century. By the time the movie ends, you might feel drugged from lazy laughs and curious glances in the audience, if somebody left a cue for you to follow. 😛 I usually watch a movie, from start to end, cause that’s how I work. I have a review to write and a hobby to spare. If you have any of the two above mentioned reasons – then go watch this movie. It taught me a lot. One thing – I cannot just not appreciate a movie because it’s nothing snazzy and smart, nor I can applaud a movie just based on stars and the trail.