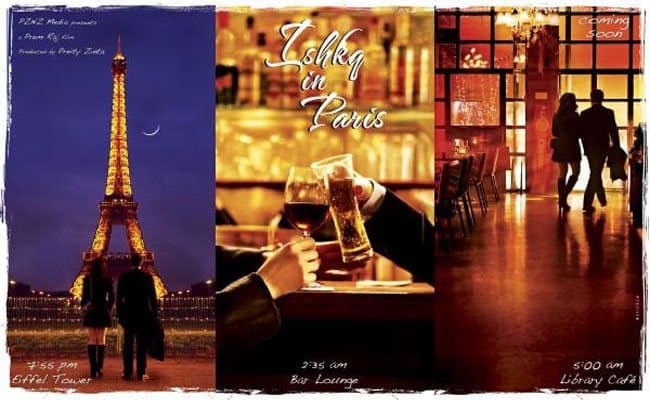 Prem Raj. He was phenomenal. But apart from that, the movie is as stereotyped as it can get. Preity Zinta made it pretty clear why she should go back to being a businesswoman and forget that she was ever an actress. Yes, the movie is that lax! If you mix, When Harry Met Sally Style and all the lovey dovey love stories of the century, you had get a pretty confused movie, Ishkq In Paris.

Preity Zinta as Ishkq stumbles upon Rhehan Malliek alias Gaurav Chanana as Akash in Paris, the city of love. The change in the attitude of both the people over time, the things which they start thinking too much about, the relationship straddles for peace out and the story of this mission Paris, stretches into love songs and a journey which is seen as life changing, except it’s not. Preity, Paris and Prem Raj whip up a soufflé romance. A believable tale of modern day love culminated into shaky misguided climax which ends abruptly. Like a brake in your smooth Volkswagen.

There is Salman khan too. A cameo, of course, which was not so much of surprise, but he was the best. 😛 Preity Zinta, being one of my favourite actor whose dimples could heal all the flaw of the movies once upon a time, didn’t quite work out well this time. Her independent, strong and bold act in the first half was fresh as a mango in summer but then she faded away like a comet, slowly and swiftly. Isabelle Adjani as Ishkq’s mother was too young to play her mommy dearo. She was not disappointing but neither was she out of the box. To complete the act, the hero of the movie turned out to be stale. Really. If I am calling this movie, a work of street art then he is the reason why. Put anybody, ANYBODY else in his shoes and that anybody could have done a better job. Confident and yet not cocky, he did manage his role on a roll, but I was not sustained with the macho confidence. The exquisite camera work by Manush Nandan makes you understand why the movie shall work, for any reason. If anybody who hasn’t been to Paris, he had want to pack his bags for a getaway.

“Kudiye Di Kurti” has some lyrical sense to it, which sways in the favor of the movie. “Teri Choodiyan Da Crazy Crazy Sound” is nothing new. “Saiyaan” is songs which you had keep in your iPod for sometime before you trash it out for songs from Aashiqui 2. Sajid-Wajid did quite well, but the duos were pretty bored with the attempts I guess.

The movie stays with you for its brilliant moments, which completely feels good if you have to watch this movie with a loved one. Preity said it’s a family movie. I had rather leave it to you for that. But instead of having the whole bunch, Preity disappointed, why not risk it for yourself? And if you are a Zinta fan, then you had go to see her comeback, whether you read the review or not. 😉