Highway is a Bollywood drama film directed by Imtiaz Ali and produced by Sajid Nadiadwala. It stars Randeep Hooda and Alia Bhatt in the lead roles. 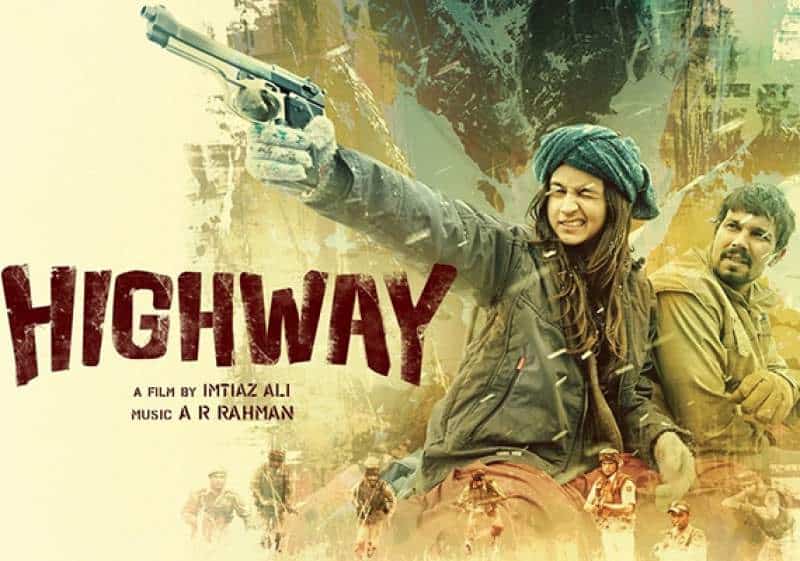 Candyfloss Goddess, Alia Bhatt signed this project to prove herself as an actress of substance. Did she succeed? I could not decide. The movie showed her in a very challenging role, needed lots of efforts to be made, the road at times seemed bumpy and too long but she managed just well without having too many movies in her stride. Highway has come at the right time. For both Hooda and Bhatt. A couple of damaged strangers seeking redemption via a road journey is the premise of Imtiaz Ali’s latest ‘Highway’. Imitiaz is a talented director. He was never made to bluff into the audience’s heart. Both the actors have a chemistry which seems natural and yet forced. The set is ‘motion’ed all the way long which suits the characters development and is fun to watch. There’s no adrenaline rush, but there’s a serene feel to it. Much like his previous films, Imtiaz’s female protagonist wants to break out of the existing rules and regulations, to lead life at her own terms. Highway’s commercial elements arrive only in the second half, but they don’t get in the way of the story. It doesn’t try to be The Motorcycle Diaries. 🙂

Veera Tripathi (Alia Bhatt) is a rich, bubbly and proud bride-to-be. Mahabir Bhatti (Randeep Hooda) is a criminalised, uncouth truck driver who kidnaps her along with few other dacoits. This unlikely couple is thrown together, first reluctantly then companionably, for days at a stretch, as they rattle down the highway.

The jat act by Hooda, we brought but he is not an actor in the truest sense. He has always done unconventional roles and this movie was supposedly made to redempt him, but does it? Where in one scene, Alia gets a chance to escape from the clutches of her kidnappers, but returns to them after she finds she has nowhere to go. In another, she bursts into peals of laughter, followed by a bout of sobbing. The extremities are not well scripted or explained but Alia does justice somewhat more than Hooda does to his character. His character opens up and frees himself from the self-imposed shackles towards the end which was really well done. cinematographer Anil Mehta deserves a round of applause for capturing everything so beautifully. The costume designer captured the essence of the movie.

‘Patakha Guddi’ is my new mantra song for 2014. So classically unique with some awesome lyrical. Betod hai bhaisaaab! 😀 AR Rahman. Just one word for ‘Maahi ve’ – fabulous. The songs and background music is extremely fulfilling to the ongoing acts and emotions.

Highway can be a debacle according to trade pundits but watch the movie if the weekend is too long or boring. It will surely cheer up the traveler in you. I, now seriously want to visit those valleys and rods which Imitiaz captured. Paisa Vasool, maybe. The actors are worth the dimes but then again – This is a movie which relaxes the nerve and stays with you ‘in the moment’.