Gunday (English: Outlaws or Goons) is an Indian action crime thriller film written and directed by Ali Abbas Zafar and produced by Aditya Chopra. The film features Ranveer Singh and Arjun Kapoor in the lead roles while Priyanka Chopra and Irrfan Khan appear in supporting roles. 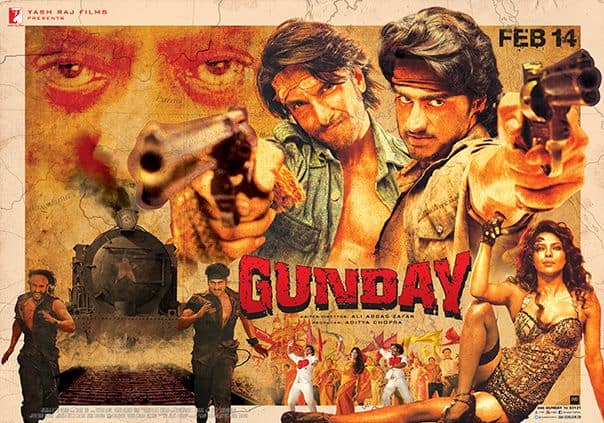 Wasn’t the trailer promising? All jazzy, flamboyant with the right amount of history thrown in? One of the best trailers I have seen in quite someday. But, it wouldn’t be wrong to say that the movie isn’t THAT good. Pity? Yes. Even though I didn’t like it as much as i had hoped, the trio is so good and so explicitly entertaining that i cant help but smile at how the star-power is back. Bollywood signifies a trail of success based on the star cast. And its not wrong to say, but the actors have bluffed their way into the audience’s hearts with their bland dancing, signature smiles and nakhre. The lead cast of Ranveer Singh and Arjun Kapoor, emerge genuinely earnest and flash their six-abs with enough flourish. They grunt, grin and romance with aplomb.

The story is set in the backdrop when Bangladesh was formed. This film tracks the story of two friends Bikram (Ranveer Singh) and Bala (Arjun Kapoor) who are now based in Kolkata in the 70s. The movie shows their rise to power by selling the illegally looted coal, their friendship and their love for Nandita (Priyanka Chopra). The movie also portrays the absorbing tale of two bandits who are pursued by intelligent and ruthless cop (Irrfan Khan).

ACP Satyajeet Sarkar needs to be mentioned even before the trio. He is the talented Irffan Khan. Such a class act! Also, talking about class- Priyanka did something trashy, after all. She was just a sidekick with charm. The coal-looter Duo were the high point of the movie. Their childhood scenes were tantalising. So much power packed. So enthralling that when Singh and Kapoor actually come through, you find them a bit of a drag. The movie has some surprises and some we-knew-all-along. The ending is just perfect. Ranveer Singh has the confidence and Arjun has worked hard and reached this level.The direction is well researched and has lots of new looks to a story which could have sucked.

The foot tapping music of the movie is the plus point. Something which made me feel good about the movie more. The choreography and dance steps are colorful, sensual.’Jiya’ is so so addictive! All the Mughlai theme-ed songs are icing on the cake. The bengali soundtrack suits the tempo.Just what the movie needed.

A must watch. But beware of the star casts reliance on the cast more than performances. The movie isn’t really a love story or perfect for V-Day. Yet, it can add adventure to the already interesting day (For all those lovers out there!) OR give a shine to your day amongst other usual days (For all the happy singles out there!).