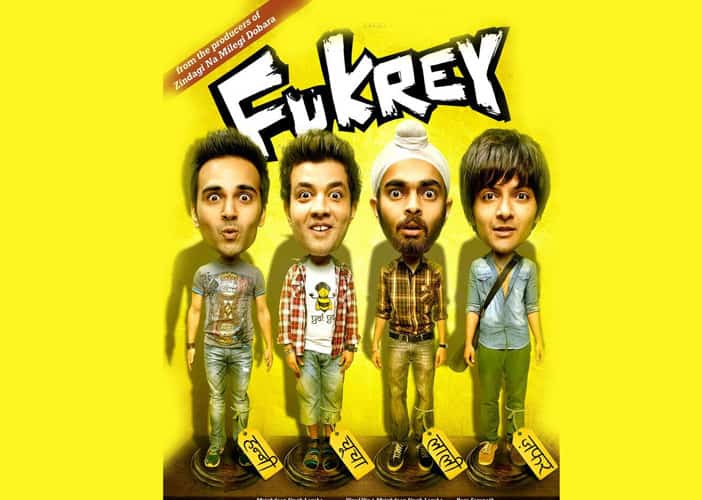 This isn’t a movie which you had expect yourself to go and see. It’s a cinematographic description of reality and dreams. There is everything which you had previously seen in the movie, Student Of The Year. But it is in the Twilight mode. More of like stale. No model like girl friends, no larger than life jokes, neither the set up is luxurious (even for the part where the luxury has to be shown in full blossom). Fukrey is a mild disappointment. I wasn’t expecting like hell anyways.

Hunny (Pulkit Samrat) and Choocha (Varun Sharma) want to get admission in a cool tagged college, not for Studies but to woo beautiful girls. Lali (Manjot Singh) dreams nothing and prays about nothing but the entry into the same college as his girlfriend. And the fourth one Zafar (Ali Faisal), dreams to become a big musician one day. Along the way we meet Bholi (Richa Chaddha) a foul mouthed Punjabi girl who invests in their plan making their life hell. This is an Indian fable of modern times.

Pulkit Sharma has done a jubilant job of portraying the youth in its true sense. The shortcut methods taken up by the youth are in its own sense, relocatable. Richa Chddha as always is awesome. Zafar Ali has done better job of playing a guy, lost in dreamworld. Pankaj Tripathi as the college guard Pandit is a character you had want to see more often. Priya Anand enthralls simplicity, which is an addition to the already simple simple silla. Director Mrighdeep Singh Lamba goes overboard with some scenes which has made the movie lengthy. But just like other Farhan Akhtar productions, Fukrey too provides ample laughter and funny moments to keep you hooked.

I wish I hadn’t lent an ear to its songs. They are worthless additions to an already restricted soundtrack which kill the mood zone. Where certain numbers pike the intensity which the second half offers, I, swear to God don’t remember a single track from the movie. I don’t want to remember. ‘Ambarsariya’ might be likable, due to its lyrics, still.

With an ounce of Delhi Belly to it and lots of Oye Lucky Lucky Oye Charm, it dies and rejuvenates on its own pace whereas you had wish to have not come to watch a repeated portrayal of youth, it will/shall be overshadowed by the success of well promoted and better stars movies like Yeh Jawani Hai Deewani…

What does the title stands for? Street-smart, good-for-nothing young full of life and zeal boys are delhi-slanged with this word. The gorgeousness of the simplicity and the bromance which it has to offer, you might end up liking the movie for its everyday life scenes which make an impact with the old wrinkled faces shown and the dialogues which carry off naturally from one character to another. But apart from all the praise am raining on his movie – it failed to provide me entertainment.