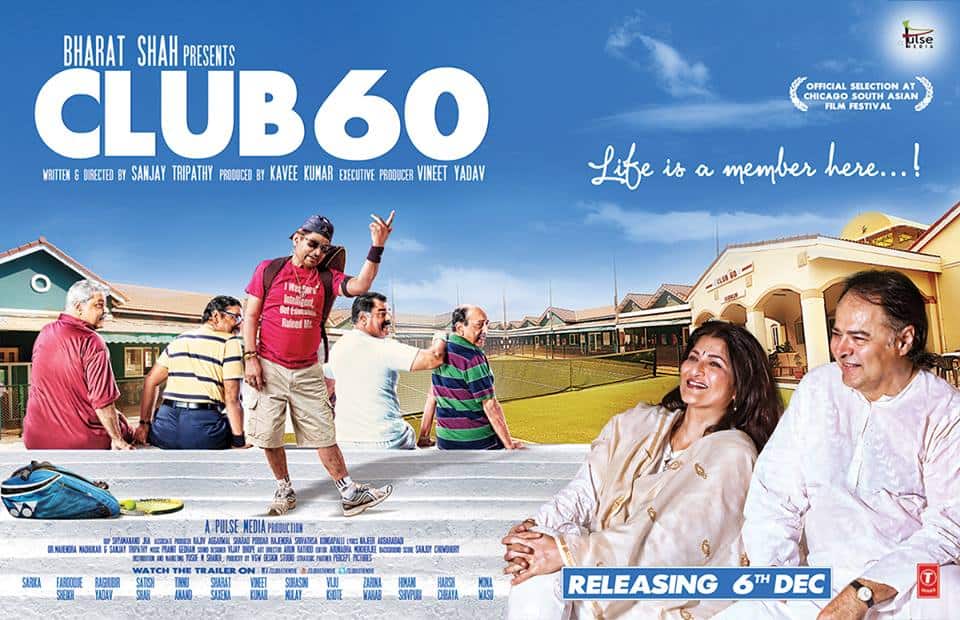 Class act by actors who don’t belong to ‘another era’ just as yet. Whether you are 20 or 80, this one will definitely move you. Its Bahgban kind affair. movable and slow but fast in its perception and message. CLUB 60 is about Letting Go after spending the required time in grieving for the loss of a loved one and how strong a love can last. This movie needs attention from the viewer and patience at times, which isn’t hard as the movie is plain Jane and yet unique towards the end. As the name suggests, it doesn’t have ‘new blood’ in it and no seductive dance sequences or bedroom sexism and flirty etiquette…. it just comes at the right time when movies like Bullet Raja, Ramleela and R…Rajkumar.. all turn out to be sensual and sexual in some happenstance.

A glance at 62 years old Manu bhai Shah (Raghubir Yadav) and his gang which includes Dhillon (Sharat Saxena), Mansukhani (Satish Shah), Zafar (Tinu Anand) and Sinha (Vineet Kumar) are a group of irrepressible ‘five’ whose lives revolves around a tennis court in a club called CLUB 60.

Dr.Tarique (Farooque Sheikh) and Dr.Sayra (Sarika) are a couple living in Pune who have lost their 20-year-old son to a mindless act of terror in Denver, USA. They go into depression and during this time that Mannu bhai (Raghuvir Yadav) storms into their life who, forcefully befriends the couple. Dr Tarique to join him every morning to play tennis at Club 60 where he introduces him to his friends, Dhillon (Sharat Saxena), Jaffar Bhai (Tinnu Anand), Mansukhani (Satish Kaushik) and Sinha (Vineet Kumar).

Farooque Sheikh and Sarika are both brilliantly cast as grieving parents. Loved thier acting. its pure. Satish Shah acts as the likeable Sindhi broker with soul. Sharat Saxena and Tinnu Anand – come off their negative image and do some brilliant acting in the second part of the movie. Vineet Kumar, Raghubir Yadav, Suhasini Mulay, Harsh Chhaya and Zarina Wahab lend able support in their brief but effective roles. They cannot be missed out!

Have you ever done a ‘to-do’ list? This one goes in that. Bear with emotional blah blahs which at times pull you off from your happy mood, which you’re into when you arrive to watch a movie. but other than that, the movie sails. Smoth and with so many after-thoughts. I beng a person who isn’t too fond of low budget full on drama’s, I had take half the star out – but, thats me. Maybe you had appreciate the movie to the brink!