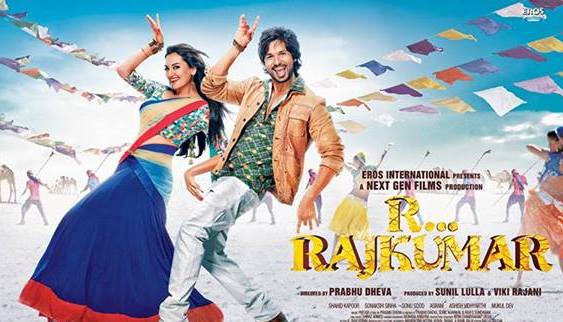 Everytime Shahid sees Sonakshi – the inevitable happens and he goes into the total awara romeo mode. And the audience yawns a bit. There are enough scenes to qualify as class when it comes 2 dancing with both the feet or the kick ass axe fighting’s but when it comes to giving color to your story – Prabhu Deva fails, as always. Shahid Kapoor wears the same Nike shoes throughout the film and they look quite lived in. Wonder, why they chose to keep this part of the film so real where everything else was so random. If i go into small small details of the movie- i might embarrass the Shahid Kapoor fan club but ya – he did manage to shed his chocolate boy image with this movie. He has zest and his gussa is quite valid, so are some of the dialogues like – silent hojaa, nahi toh main violent ho jaunga. Even Sonkashi springs in with lots, say for instance (to Sonu Sood) – “Agar tum Rajkumar se lad kar jeet jaate ho, toh main saari khud kholungi honeymoon mien”

Rajkumar (Shahid Kapoor),while working for a drug baron named Shivraj (Sonu Sood), falls in love with the enchanting fiery Chanda (Sonakshi Sinha). while they both fall for each other by the intermission, the next part of the movie shows how Shivraj fails for Chanda and decides to marry her. which of course Rajkumar doesn’t let happen at any cost.

Prabhu Deva did try his best. The sets were colorful and the songs were shot at different destinations, like old times with romantic duos dancing around the bush kinds but he failed miserably in choosing the pair and even making a movie with such aggression that in the end, you are bored, a bit. Shahid earnestly attempts to be a Salman Khan and Akshay Kumar prototype, he isn’t as effortless.Shahid Kapoor gives his heart and soul to the role He kicks asses but his romeo act, I don’t buy. While Sonakshi Sinha is all we see these days, so, well, she was all i saw when she on screen.. maybe because her screen presence is haunting or too well defined as an actress. Ashish Vidyarthi goes topless more number of times than Shahid Kapoor Sonu Sood looks more and more well suited as a villain and he plays his game well. All the badass gunda act, I bought. (But with difficulty). The film is loud, dramatic and over-the-top. A blunder which is not going to settle well for Sahid or Prabhu Deva.

‘Gandi baat’ has masala lyrics and awesome tune. You want to listen to it again and again. Its raw. “dhoka dhadi’ and ‘saree ke fall’ is good too. ‘Kaddu katega’ is again, nonsense. Because by the time that song comes- you have had enoguh.

Watch it if your bored with Ramleela or after too much of Nagada dhol on streets, baraat and places. Time for some Gandi baat if you want to see the chemistry between Shahid and Sonakshi. Or else, stay at home, sleep.