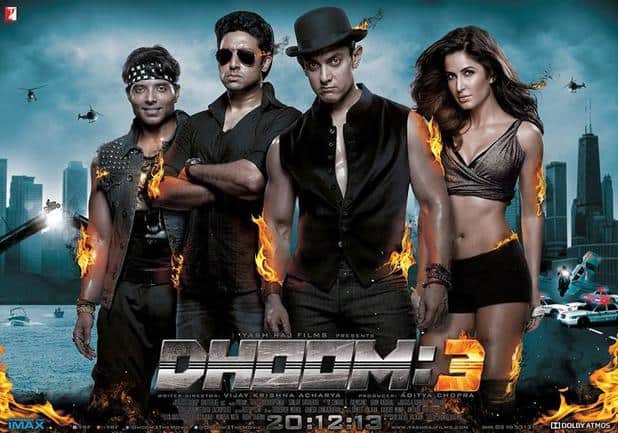 I was as excited as a person can get when given a chance to watch the movie one has been awaiting since its inception as a hot trailer and floating memes about how there are some gross mistakes and inspirations from ‘Now You See Me’ in the 3rd instalment of the ‘Indian Fast and Furious’. Abhishek Bachchan and his leather jacket continue to share the same number of expressions they did nine years ago and Katrina just gets hotter while Aamir proves that he can be ‘like Hrithik’ and not an original forever.

The movie is set in Chicago and it has a ultra cool cast with lots of charming locations being blown up and things thrown to make it a video game frenzy but still, a movie needs a storyline, which Dhoom 3 lacks. Also it lacks the continuity and aura of being a thriller. no surprises that it was not as good as the other 2 Dhooms but it shall be the shizz of the season. It would have been a lot better if the movie was planned with more precisions cause everybody from the cinematographer to the stunt men take the audience for granted which is one thing which is going to piss of critics big time.

Dhoom 3 is a Hindi action thriller film, written and directed by Vijay Krishna Acharya and produced by Aditya Chopra.

Sahir (Aamir Khan) loses his father because a Chicago bank doesn’t allow him to continue his circus and asks him to shut shop. Since then his mission is to shut the bank down, he wouldn’t settle for anything lesser! ACP Jai Dixit (Abhishek Bachchan) and Ali Akbar (Uday Chopra) take charge of the case in Chicago and the local police take a back seat. The rest follows.

Aamir khan was spectacular, but in his own way… he wasn’t as good as Roshan which brings me to the point that he cannot be villainously attractive.

The director gives a varied dimension to the flick by keeping the core- run and chase element- intact. The movie has an emotional pick. Katrina Kaif plays Aaliya, Sahir’s love interest and as short is her role in the movie, is the audiences patience whenever she is popped up on screen just to give a little oomph to our furious boys.

Abhishek Bachchan and Uday Chopra’s famous chemistry from the previous films does show in some portions, which is one of the best things about the movie as they couldn’t get any better together. Uday’s absence from the industry for so long is fulfilled with the fact that he was not slacking away but he did his homework before coming to life as a comedian-in-crisis. Dhoom 3 is full of loop holes, over-the-top acting and an overdose of action that doesn’t fit well all the time.

Good background score but the main scores were a huge letdown then they were on radios and online stations. The music hasn’t got the charm which earlier Dhooms had. Malang’s boring and so is the Dhoom soundtrack. No judgement there.

A movie which has the new style theme with leather jacks and kickass stunt scenes and which will make you feel elated at points but all and all, I had skip it unless am a huge Aamir khan fan (which everyone is these days) or I need to have a speed therapy which the movie does gives but not in the dose required.