2 States (2014) Review: 2 States is an Indian romantic comedy film directed by Abhishek Varman based on the 2009 novel of the same name written by Chetan Bhagat. It is produced by Karan Johar and Sajid Nadiadwala. The film stars Arjun Kapoor and Alia Bhatt in lead roles. 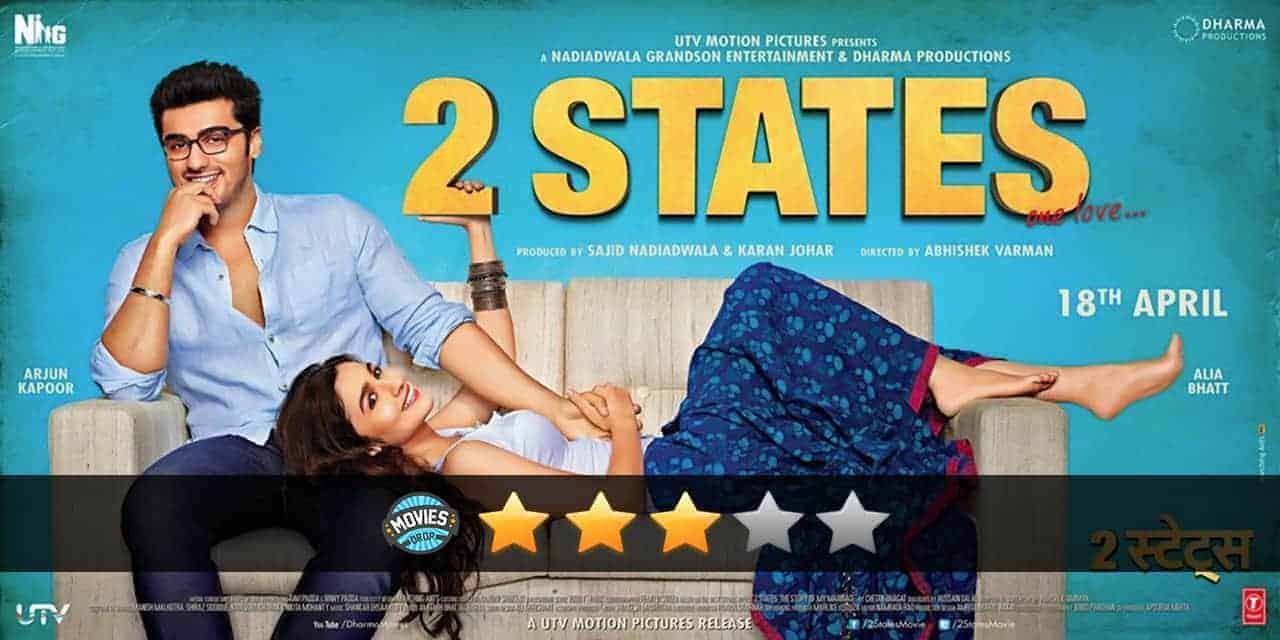 2 STATES, a movie with a combination of drama, melodrama and a convincing end. Chetan Bhagat’s another novel turned into a movie. Beautifully pictured by renowned director like a magician fills a life into a beautiful sculpted lady similarly did the director of the movie.

Like every love story, Krish – the hero and Ananya (Anyay :P) – the heroine, meet on the very ordinary situation and they fall in love too at the ordinary pace as the every another couple does. The scene takes place in the campus of IIM-A, where they are for their MBA program. 2 years of their training period fly like a flip of book, pretty and glamorous. But now comes the wedding!

OK wedding, wait that was not the normal wedding story. Ananya Swaminathan as the name suggests was from the Shuddh Brahmin Tamilian family & Krish Malhotra belonged to the Pure Punjabi Clan. Now I guess the wedding picture to you won’t seem that boring. Arrange marriages have always been stereotype to us. And the love marriages are meant to be tragic. But here, the duo decides to go for love + arrange marriage. Yes, so now you can imagine how colorful the wedding must be. Where two cultures come together to bond for a lifetime commitment.

But the journey is all about building the path from the relationship status : “in a relationship” to “happy love + arrange marriage”. For this you need to be at cinema atleast once. You can even enjoy it twice.

*most beautiful scene : The Wedding.

Display of true family values and commitment in a relationship. The son and father relationship will surely make you emotional. You may not cry, but it will form a lump in your throat.

Right justice has been done to movie by giving perfect music. Songs can give the pure feel of different cultures bonding together. Punjabi Dhols & South Indian Mridangam blend together into music so perfectly as did the love of Ananya and Krish.

Typical Karan Johar sets. Most of scenes were in yellow temperature. The city Chennai was pictured very beautifully. The song Locha-e-Ulfat was just too magnum. The timing of actors, camera movements and educational objects were creatively used specially in library scene.

Director, I may say was too smart in choosing every character. None could to as best as Alia and Arjun other than them, Amrita Singh was at her best as Punjabi mother-in-low. The character of Duke (a momentary face) will make you laugh the most. Ronit Roy was also a focused character as usual. He was too intense. All other characters were fair too and gave the movie their best.

The movie paid great justice to the novel. We could see the novel being paid in form of live story. Too simple, yet too great. No manipulations, but very lovely.