Bhoothnath Returns (2014) Review: This is an Indian horror comedy film directed by Nitesh Tiwari and produced jointly by Bhushan Kumar, Krishan Kumar, Ravi Chopra and co-produced by Ajay kapoor. A sequel to 2008 film Bhoothnath, the film features Amitabh Bachchan in a leading role followed by Boman Irani and Shahrukh Khan in a supporting role. 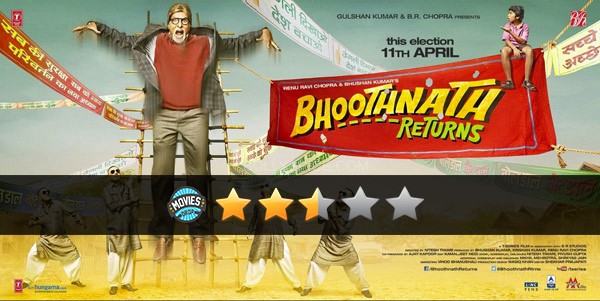 With places like bhooth world where the ‘bhooth’ is neither funny nor scary but just an absolute actor – May the odds be ever in your favor. Bachchan Sir can’t be anymore reviewed or criticized or even compared. He has crossed that benchmark but what isn’t crossed is a good storyline and the horror-comedy genre in Bollywood. Kids and him can never go wrong but the audience needs something more than a loving natkhat bhooth and a adoringly amazing talent bonding over cricket and jokes. The efforts are genuine and presented in the most innocent way possible but it needed to be crafted or moulded. And in the season of elections – This is certainly not the best way to pledge vote or drive youngsters to vote. “Jo vote nahi dete wo apni awaz logon tak pahuchana nahi chahte. To hum bhi unki awaz nahi sunana chahte.”

Bhoothath is back on earth. Akrod (Parth Bhalerao), a slum dweller, who is known for his street smartness befriends Bhoothnath. The tiny tot with the swagger of a Hollywood megastar soon starts communicating with other ghosts to vacate old, dilapidated and haunted properties as Bhoothnath uses his smart tricks for this noble endeavour. Local politician Bhau (Boman Irani) is the villain who is next on the duo’s plate to get cleaned up.

Director Nitesh Tiwari could have gone a bit easy on the corruption charges and the blame-game politics in the movie. If all we have learnt in Bollywood about politics in movie is that – Either it breaks the story line or makes it. Here it becomes an overdose and when we want the tot and the finesse actor to showcase entertainment, we are left biting nails with insensible jokes and old tricks of bhooth aya bhooth aya. The 71-year-old thespian can make you smile and weep big, fat tears as he energies tremendous potential in each line he speaks and acts. Sanjay Mishra as an honest lawyer will keep you in splits with his poker-faced humor. National Award winning actor Usha Jadhav, as Akrod’s mother, has done her job sincerely without being melodramatic. There are several sequences where Amitabh and Parth are doing the same things, same body language, exact dialogues and Parth emerges the clear winner.

The supporting and guest casts are all well-fit but the storyline tries to accumulate too much into one frame at a time.

Pary toh banti hai. A very refreshing track and the background score is applaudable too. Ram Sampath’s ‘Har Har Gange’ disappoints due to its oft repeated Punjabi folk based tune. Even the ‘qawwali’ touch is heard before. ‘Dharavi Rap is worth listening to.

For above 18 junta, I had say – Only, we wish it was released a week earlier, before the country went to polls. But then, it would not matter much. For Kids – go play.