Race 2 (2013) Review: This is a action thriller film directed by Abbas-Mustan starring John Abraham, Saif Ali Khan, Anil Kapoor, Deepika Padukone, Jacqueline Fernandez and Ameesha Patel. It is the sequel to the 2008 hit film Race. This flick is produced under Tips Films banner. 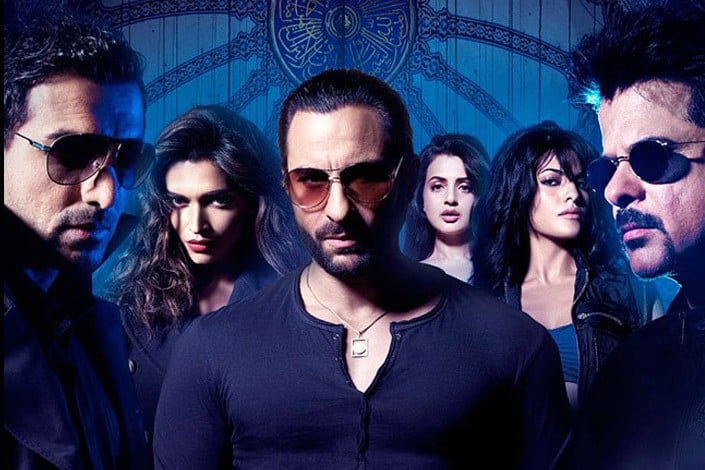 Race 2 is the first major release of the year 2013 and as usual, expectations are really high, especially after the hit movie “Race” three years back. The much talked about film released today and I got a chance to watch this movie. This is the first Bollywood movie to be released with Dolby Atmos Dolby Laboratories, Inc. With all those actions and stuffs in the trailer, does the movie create the same magic like its prequel Race? Is it worth to spend two and half hours inside the theatre? Now, here is my exclusive review for the movie “Race 2” (2013).

Movie Plot: Ranvir treads through the world of the Indian mafia in Turkey as he looks to avenge the death of his lover and partner in crime.

The movie hall was packed (almost), the expectations were high (almost), so when me and my friends went (one of whom had not liked Race 2’s prequel at all and the other one who was in awe with a masala thriller of 2008), I was sure that this one will be a typical Abbas-Mustan with a lot of zing and life yet will kill your expectations somewhere. While some may like it a lot and some may not – all in all, what a fall! (Humpty dumpty in logic or else, high octane thriller)

Race 2 is an exception. It’s a not-so better sequel but a better suspense thriller than any of its contemporary brothers ever made.

With a script that turns tables in every ten minutes and Anil Kapoor – Ameesha Patel’s yawning yet bold cameo pushing its way into the story – the actors have done quite a job. John Abraham is officially the chocolate boy now and Jacqueline is a damsel with tress who is as good as Deepika’s impressive persona on screen.

While Anil has tried to make you laugh and Ameesha is the reminder of how to make a flop comeback – Saif Ali Khan stills the limelight, throughout with his screened and chiselled look through and through iced with crispy dialogues and tantrums.


A born street fighter (a concept well borrowed and not stolen from Hollywood, I must say), Armaan Mallik (John Abraham) has now become a casino king, with his step sister Elena (Deepika Padukone), who is as sexy as smart and as crooked as him. Dangling on his arm is the sexy pickpocket Omisha (Jacqueline Fernandez). Ranvir Singh (Saif Ali Khan) is the actor who makes a comeback with a bang, where he cons a casino owner and Armaan doesn’t waste time in allying up to him. And neither does his sister. Though Armaan tries to con Ranvir in his game, the latter agrees to partner with him in one big heist. But things are not anything they seem to be. And very little goes according to plan.

There’s a lot of backstabbing, cheating and lies going around. It may be enough to get you interested, but it gets tiring after a while. I will not say much about the plot as the story are the spoilers, literally. My cheese flavoured popcorn was crunchier than the plot in any case, yet not that cheesy. 😛 CONFUSING? Not as much as the characters who try their best to win you with their smarty pants and loud mouth.

Kiran Kotrial’s dialogues are typically Bollywood fiesta and Aditya Pancholi is passable as a Godfather of some sorts. Abbas-Mustan has a very magnetic signature about their movies – they don’t easily disappoint. After Saif’s cocky ‘Cocktail’ and the Fool’s gold package – ‘Agent Vinod’, he shines and I think he should thank the duo to give him the platform to showcase some act. While Abraham was always in news with his breakup and tit-bits – he has an important role to play in the movie which is going to give him a golden ride for some time. As for Deepika – she is always better, just give her a yatch and a dress. (Too much this time) while Jacqueline, she is a baby who is growing day by day (her erotically irritating “babyyyy” kills the show at times). As for other actors – they deserve their mentions.

The songs are cool. Not cooler than the ones which we grooved for a lot of time way before. Salim-Sulaiman’s background score is good. Hussain Burmawalla’s editing is slick. Peter Heins’ good action (the parkour chase) is heartening. You can buy Race 2 songs from Flipkart for just Rs. 81.

Lot of bootilicious booty show and a good one time watch with no-brainers banner bailing you out – “Race 2 is surprisingly good and as not many sequels are as good as you want them to be – it satiates the ‘racer’ in you” (according to the friend who loved race), “Race 2 is lame at times and dumb in logic yet it keeps you on your seat, glued” (according to the friend who wasn’t a fan of the smashing prequel) as for me – Race 2 is slickly packaged, glitzy, action-packed entertainer, which is worth spending some bucks that you should not regret, yet if you don’t want the risk – wait for the DVD and have a blast with the 2013 bombvilla, which is climax-ed and yet pales in front of its daddy Race.