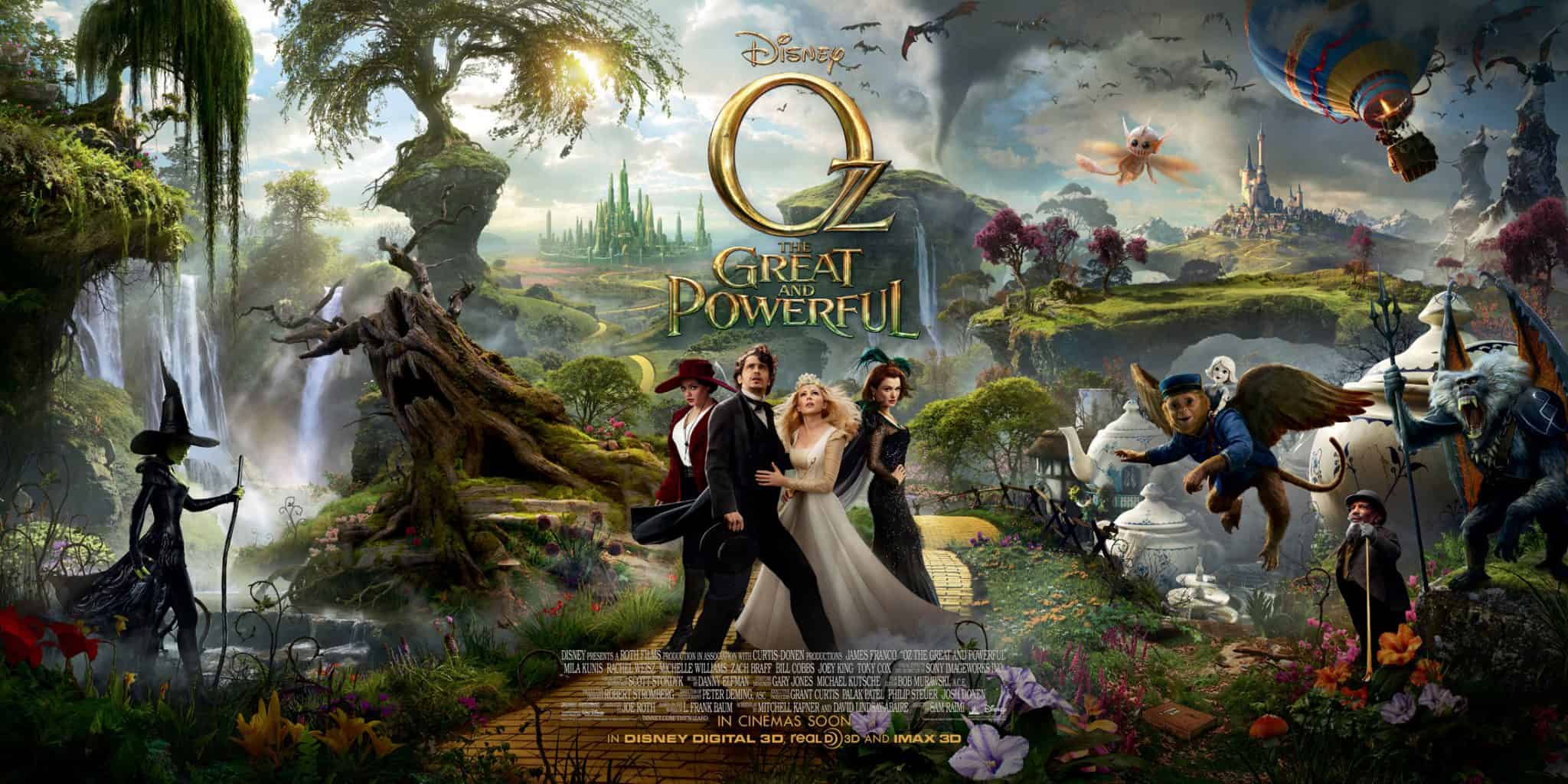 Mitchell Kapner and David Lindsay-Abaire penned nothing too new and fresh. L. Frank Baum’s 1900 introductory novel The Wonderful Wizard of Oz wasn’t justified. Photography by Peter Deming was the highlight and acting by the stars was outstanding.

Oz the Great and Powerful is a 2013 American fantasy adventure film directed by Sam Raimi, produced by Joe Roth, Grant Curtis and Joshua Donen and written by David Lindsay-Abaire and Mitchell Kapner. The film stars James Franco as Oscar Diggs, Mila Kunis as Theodora, Rachel Weisz as Evanora and Michelle Williams as Glinda.

Storyline: A small-time magician arrives in an enchanted land and is forced to decide if he will be a good man or a great one.

This 3-D adventure borrowed from a 1939 movie starring a young Judy Garland, opens in a black-and-white Kansas, with a twister.

Now who doesn’t know what happened in the OZ? What happens in OZ, doesn’t stays in OZ. A tornado transports magician Oscar “Oz” Diggs from Kansas to the Land of Oz the beautiful balloon scene is impressive. Three witches, Glinda, Evanora and Theodora, establish him as the ‘Wizard of Oz’. From there on, it is OZ who tries to snatch the power and reign from a wicked witch and OZ never remains the same again. Lots of swinging’, twiddling, toying and gnawing later, the audience is set to find out what happens in the end. The film’s journey is funny and poignant and memorable simultaneously.

James Franco as Oscar Diggs / The Wizard of Oz is brilliant. 127 hours hero did shine again. Mila Kunis as Theodora, Rachel Weisz as Evanora and Michelle Williams as Glinda were as expected. More like beauty queens rather than witches they dressed. May, Master Tinkerer and the Strongman were quite fulfilling. These kinds of movies need more fulfilment than satisfaction. Two great and surprisingly powerful characters: a winged monkey and a wee girl made out of china were enthralling new entries. The other supporting cast tagged along the well narrate story (which wasn’t exactly ‘narrated’ narrated). A mesmerizing visual treat to a generation which has not seen the ‘original’ Wizard of Oz.

Danny Elfman – you are extremely contagious with your talent. I salute you. The theme of this movie being a ‘family fantasy’ sustains in each song. “Where Am I?/Schmooze-A-Witch”, “Fireside Dance”, “Meeting Finley” and “End Credits from Oz” will surely win an Oscar for the ‘feel’ which it gives. It simply transports you with its swing and swoosh.

Director Sam Raimi’s unstrained passion to put together this masterpiece with precision is amply clear. Editing by Bob Murawski is flawless. He links the film with the 3D-lensed imagery to produce a fluid, unaffectedly multidimensional experience. AND, the news is that kids will be more scared than enchanted. So, if your kid has
done something seriously not-funny, and still needs a movie treat, then this may end up being a good lesson for ‘bad’ kids. Well, just kidding. Still, tots with innocent fairytales as bedtime stories not allowed. 😛

Apart, from the script which jumps and falls at many places, only to bruise and heal alone…the story binds the characters well. So well that I might ask everyone who needs a good cinema feel, to go watch it. Being a 3D delight, I had want you to maintain the 3rd dimensional respect borne out of the sheer hard work to make OZ 3D.