Murder 3 (2013) Review: A Bollywood movie and the sequel to the 2011 film, Murder 2. It is directed by Vishesh Bhatt and produced by Mukesh Bhatt. 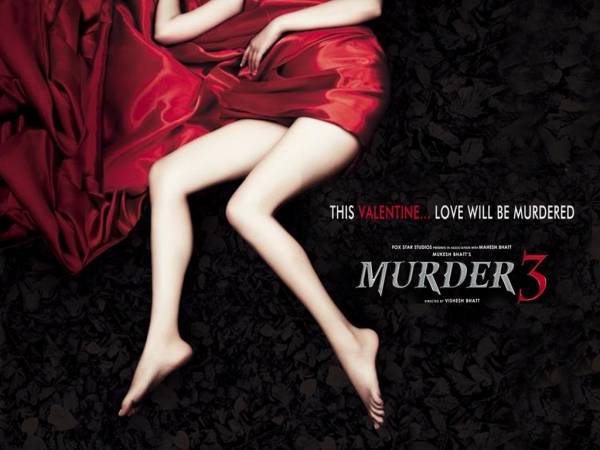 Storyline: A hot-shot fashion and wildlife photographer Vikram gets into a relationship with Nisha. She moves in with him in his palatial house outside of the city. The old world house, made decades ago is as beautiful as it is scary.

The youth filled the seats in the stadium where one had to see the match between newbie’s versus tried-tired oldie Randeep hooda, and Vishesh Bhatt’s attempt to ‘umpire’ the thriller which is somehow not even a bit different from ‘The Hidden Face’. ‘Murder’ with actors like Emraan Hashmi, Mallika Sherawat and Ashmit Patel, who had just started out had been a supra-hit if not super-hit. While, Murder 2 again gave a Ripperologist like me, a liking for the ‘Jack the Ripper’ based thrill in Bollywood. On the same lines, after banishing Hashmi from the banner for Murder 3 and Vishesh holding the direction seat- add on top of that, Randeep Hooda as lead, it was risky enough to fail. Which it did. Sara Loren, whose Bollywood debut opposite Himesh Reshamiya in a film called ‘Kajraa Re’ sank without a trace was a waste. The music and cinematography is best (I don’t know why but all the movies these days in bolly have exceptional songs and cinematography).

STORY: The movie is about a fashion and a wildlife photographer Vikram’s (Randeep Hooda) life that moves from Cape Town to Mumbai with his lady love Roshni (Aditi Rao Hydari). After she goes missing, leaving a video message, he becomes a suspect. While the disheartened and lonely Vikram consumes the pain of Roshni’s departure in a Bar, he falls in love with Nisha (Sara Loren), the bartender working there. And the old, yawn-yawn haunt starts.

The story looks good but suffers because of a lot of loose ends. Editing by Devendra Murdeshwar is the high point (but who cares about editing when the film is such a slack) as he keeps the screenplay from slackening too much. Sunil Patel has done a kudo-wala job with camera. The background score keeps up the element of suspense. It’s a rumour that Emraan Hashmi had rejected the offer for the 3rd biggie in under franchise after hearing the script. Now we know why. Smart Hashmi! 😀

PERFORMANCE: Pakistani actress Sara Loren is amazingly serene and beautifully fits into the character but harms the role with her “bored” acting and expressions have a new dimension with Hydari, who shines with her acting skills but leaves the audience inept. Cause Murder 3 was to be about ‘acting’ and not all that looks and bonds. Randeep Hooda, despite being hugely talented is shown a nit-wit actor. He is not going anywhere on the success ladder, except one more movie to count in his memo. With a tagline that reads – “Love will be murdered”, you are kept wondering if it’s a thriller or a murder mystery and you are disappointed but the movie doesn’t drags as much as I am…it simply sticks and sparks and then shunts down to disjointment of acting prowess, horror and lame logic of duck-land. No erotic scenes like the earlier two flicks and yet the flick is certified U/A.

VERDICT: For people who haven’t watched the original Spanish thriller, go for this or else forget about the DVD even. 😛