Maligning celebrity status of celebrities is in vogue these days but is calling shots on heirs of Bollywood families or recognizing the state of biasing wrong?

According to Kangana Ranaut, no. And so is our opinion too. Nepotism is like a blue bottle species not craving attention but getting it and thriving because of being born in a blue bottle. You know you are rare and gorgeous, and your dad has contacts. The Bollywood fraternity these days is gushing over the debate whether a monopoly exists in this highly inflammable cosmopolitan environment. 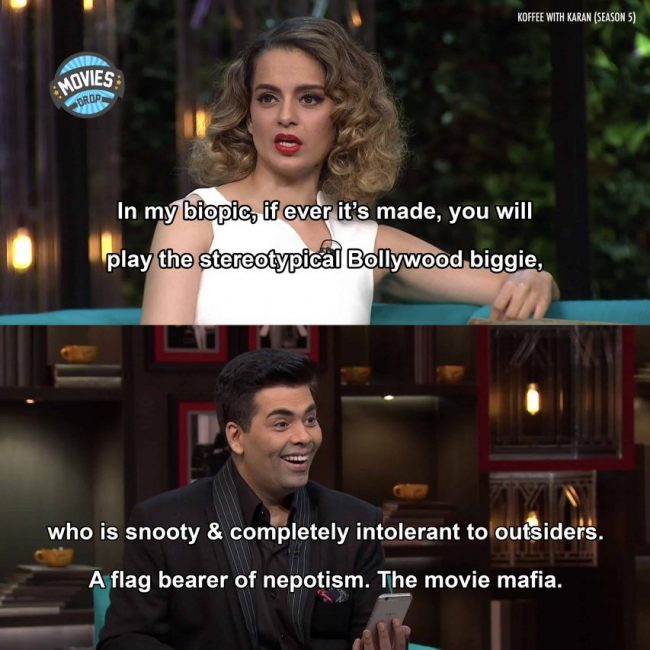 This discussion is actually a microcosm of the problems revolving around privilege. The products of the largely assembled Bollywood dynasties even know how wrong they are when they speak of nepotism rather against it. The least they can do is agree with the century-old practice of killing dreams and propagating a false image of ‘talented ones only make it.’ I think the society is buckled under the influence of those few families at the top and not all star kids deserve to be on top too. If your superstar dad is a millionaire and even possibly successful, chances are you can be one too when you turn 18.

The conversations in the Bollywood households must be like this:

Princess Diana: Daddy, what am I gonna get on my 18th birthday?

King of Hearts: A contract with the leading production house as a lead actress! What say!

Psst.. even though however much you praise the hard work it takes to maintain a body like that or wear an 18 kg dress, you are, after all, a product of the best possible luck, lot of pampered advice and you know who’s in the industry. You were born famous, and you would have given away fame (which is suddenly and ridiculously the most sought after thing in the world) for an honest profession or simple living. They say they can’t change their famous status anyhow. Well, if a vegetable seller’s son can change his status to become a doctor or a social worker, so can you. But you chose fame. And it was easy no matter what you say or how you say it.

I have so many times applauded a person for having mad crazy acting success and beauty and then realized that they have an uncle who was a casting director or a not-a-blood-sister being a famous actress already!

This is dark capitalism. Capitalism at its freaky height of disturbing social progress. Bollywood’s unfair practice of systematically marginalizing non-familiar artists cannot be justified. Media’s Hallelujah to the rising number of stars from prospective starry status is brainwashing people into believing that they can achieve naught if they don’t have a predecessor. The number games say that failures and amount of money wasted on star kids and just the propaganda to bring some limelight to useless talent has caused disappropriation of wealth and many talented young scouts being sacrificed. Blame it on the stars, please.

Bollywood has damaged qualities like self-sufficiency, modesty, hard work, impartiality, naturalism to the point of no return.

Even Karan Johar who has so wildly protested the word nepotism isn’t all the self-made man people assume him to be. His dad was one of the most respected, contact-grazer. There are so many Johar’s and Bhatt’s who haven’t gotten the chance to come out of their shells and have been buried by the obscene politics of Bollywood.

The privilege given to the star kids termed as struggle and the unfairness of the age-long process, a mere coincidence. How belittling. How sad. Bollywood is a small, incestuous, and insular world. Bollywood has damaged qualities like self-sufficiency, modesty, hard work, impartiality, naturalism to the point of no return. The ones who voice the issue consider nepotism in extremely obvious and blatant ways, such as their parents specifically producing films to launch them. This attitude needs to change. Filmmakers need to see what drought they have brought upon the Hindi cinema. The privileged will always have more say in areas like this, and many will believe them because people like to follow and hear the bigwigs and shoutouts. The norm is to blindly listen to defenders here, but the jab is to come out and accept nepotism, which is so damn apparent.

We don’t need formulas and masala dance numbers if we have talent which is true to its element and not borne by sheer luck of being born privileged. Some have been able to break free from the clutches of such narrow thinking and bring out actors such as Nawazuddin Siddiqui, Aishwarya Rai, Rajkumar Rao, Vidya Balan and our heralder of nepotism issue – Kangna Ranaut.

In India, maybe filmmaking is indeed a family business and a drastically unfair business which has done more harm than good.