So much of hard work has gone into the making of this movie that it is an absolute relish to watch the outcome. Excited audience. Energized actors and dreamy realisations of a tomboy who knows she can change history with her fists. Don’t expect Raging Bull or the Hustler or Invictus or Rambo and go to watch this movie – It is truly and deeply from Bollywood and is more fictitious than true, as far as I know. It’s good to see a mainstream Hindi film with a protagonist from the North-East, that too a woman, a champion though. 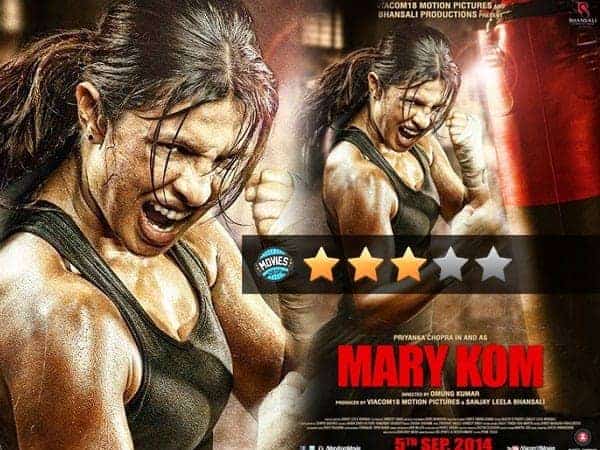 Narjit Singh (Sunil Thapa), a popular coach trains Mary Kom (Priyanka Chopra) who has to go through a lot of anger issues and against her family wishes to win three World Championships. She then marries. But, what will happen to her boxing career? Will she ever be able to return to the ring? Will a family life absorb her completely? The inter-personal and intra-personal conflicts of a daring sports woman form the rest of the film.

Mary Kom, the boxer has done it many times, and now Mary Kom, the movie, truly packs a punch. Though, I found major screenplay glitches, which SHOULD not have happened. But , alas. Priyanka dominates every scene in the film. She shines. Coach and hubby could not have been more perfect but apart from that, the movie has average performances. Director Omung Kumar showcases flair with his very first movie and he is someone to watch out for.

The training sessions and the fights are religiously well done. A story which no one knows is shown with much fan fare and loyalty by the writer. Manipur sets a tone.

A film on sports has to have the right music but Shashi – Shivamm’s music doesn’t do the trick.

Justice has been done on a major segment to the real world hero – Mary Kom, but to what extent – Watch this biopic. It is one of the important films of the year.