In Steven Spielberg’s Lincoln, we see Abraham Lincoln ruminating before dictating a telegram. He asks ‘Do you think we choose the times we are born? Or do we fit the times we are born into?’ The question echoes in Joe Wright’s Darkest Hour which revisits the initial tumultuous phase of May and June 1940 where the leadership changed hands from Neville Chamberlain to Winston Churchill. Does that period sound familiar? Yes, we are looking at the prequel to Christopher Nolan’s Dunkirk from the sophisticated, aristocratic men who argued and debated over whether to make peace with Adolf Hitler or to fight the Nazis. Neville Chamberlain could have been a better leader in a time of peace but the hour of war demanded a leader who could mock at the fear of death. Winston Churchill did not have a unanimous voice of support but not many looked beyond him to be on the esteemed chair of the venerable leadership post to steer a sinking ship away from the turbulent storm.

Cometh the hour, cometh the man!

As an Indian watching, the film about a political leader and controversial figure like Churchill is troublesome. He has generally been exalted and treated on a pedestal for what he achieved while the makers ignored how he was responsible for more than 2 million deaths during the Bengal Famine. While Darkest Hour does not change the narrative, it attempts to show why Churchill was necessary to not just save the British from surrendering to the Nazis but altering the course of the Second World War itself. In one particular scene staged in the War Room, we see Winston Churchill checking the trajectory of the Nazis marching towards France on the Europe map stuck to the wall. The camera moves closer towards the eyes of Churchill before moving to an aerial shot of refugees moving on foot as they walk past craters created by the dropping of bombs. We see a young boy in the crowd looking at the sky, making a monocular of his bare hands only to focus on a Nazi bomber plane. The young mind supposed to be lost in his daydreams is caught in a nightmare. Even his small hands are too afraid to catch hold of the Nazi bomber plane and experience the joy of victory for one brief moment. Perhaps, that power was bestowed with men who had larger hands to lift the world from the quagmire and shoulders broad enough to carry its weight. Even as the terrors of World War II have slowly vanished away from the collective memory, the world needs to be reminded every now and then to understand how the human race is highly capable of self-destruction and the men responsible for ushering in world peace. In that context, Joe Wright’s Darkest Hour can be argued to the best film on Winston Churchill as a Hero yet.

Movies on historical figures generally reduce the actors to merely play the imitation game to take a shot in the Awards Section. However, Gary Oldman although does imitate or perhaps, deceive even, as the grumpy, snobbish and audacious Winston Churchill. From his speech to his stooped gait, Gary Oldman convinces you as Winston Churchill and even in the occasional silhouette shots makes us believe that Winston Churchill himself would pale in comparison to this imitation.

The film opens with footages from the Second World War with no background score making us aware of the grim reality the world was sucked into before showing how Neville Chamberlain is being accused of taking Britain to the dire straits at the House of Commons and the voices calling for his resignation grow louder even as the man to proceed him is absent. We see a young Elizabeth Layton (Lily James who was last seen in Baby Driver) on her first day at her job as Winston Churchill’s personal secretary being advised clearly as to how Winston Churchill seeks perfection when it comes to typing his dictated speeches and does not like single spaces. When she errs, he unleashes the devil and chides her for not obeying his rules. She later returns with a telegram carrying the much-needed news of his appointment as the Prime Minister.

Not even King George VI (Ben Mendelsohn) likes the idea of Churchill’s call for war and initially sides with apologist Neville Chamberlain (Ronald Pickup). If Hitler was a direct enemy Churchill had to deal with, he had to deal with the forces against him at home, right from King George VI and his loyalist Lord Halifax alias Edward Wood (Stephen Dillane). Winston Churchill’s first public speech over the radio in order to instill confidence in the public is filled with lies that hide the fact that British forces are retreating in Europe facing possible defeat. The men in opposition and the King are aghast at Winston misleading the public. The discussion to convince him to make peace with Hitler even when Belgium has surrendered falls on deaf ears. His desperate attempt to make the US President Frankin D Roosevelt provide armed support fails. The frame is thoughtfully done here. Joe Wright focuses the light on Winston at the center with the telephone while there is an equal black space on either side of the room trying to show how his space for control is getting limited by the hour. 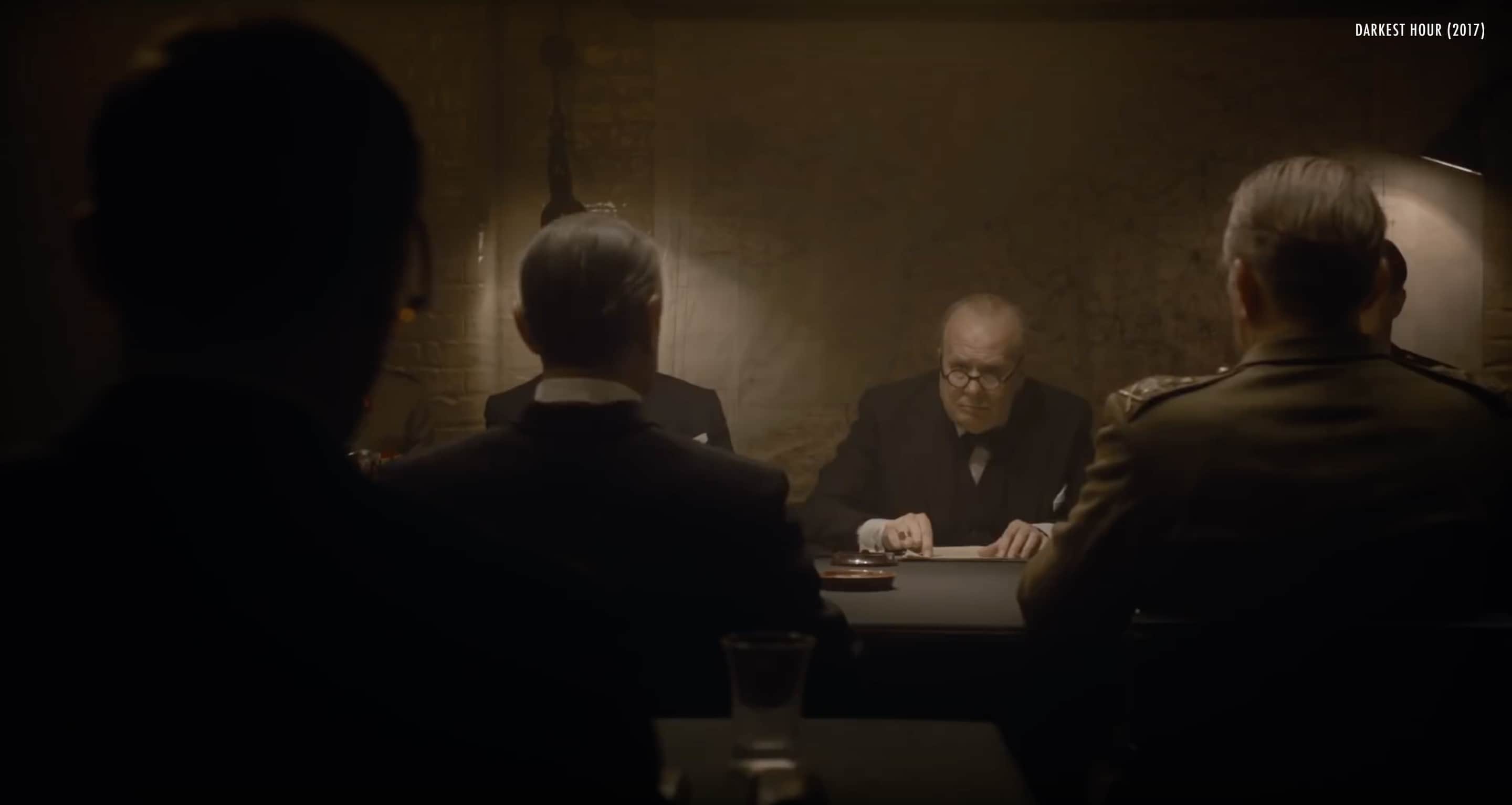 In a desperate attempt to understand the public opinion, Joe Wright fictionalizes Winston Churchill taking a detour to travel by a local train to mingle with the common people. At first, they are intimidated by his sight but he lightens the atmosphere with a dry joke before asking for names and passing jovial comments. Once he has earned their attention, he asks as to what they felt British must do: to make peace with Hitler or to fight? Their unanimous support for the latter makes him steer the House of Commons to his vision and they reciprocate.

This is a film of hope and requires the theatricality to shine. Hence, it is not surprising that unlike Hans Zimmer’s Dunkirk score sans the triumphant symphonic sounds of war, we have Dario Marianelli’s pulsating score with a reassuring and recurrent piano by Icelandic pianist, Víkingur Ólafsson that keeps pace with the optimistic thought flow of Winston Churchill. Valerio Bonelli’s edit helps with the cohesive flow of the film and the visuals merging into each other organically. Take for instance the scene where we see Churchill bent on not evacuating the troops in a heated discussion in the war room cutting to a British Commander receiving the telegram informing him of this news while he looks above only to find bombs dropping killing him and his men cutting to the mud on a dead boy’s cheeks and his restless eyes staring emptily to accentuate the horrors of war. Bruno Delbonnel creates a claustrophobic atmosphere in the war room but creates theatricality with his over-the-head shots inside the House of Commons or the battlefield. Even if despite Winston Churchill’s valiant efforts in bringing Second World War to a halt did not win him another term in the office, we hope Gary Oldman’s stellar efforts in his interpretation of Winston Churchill wins him the much needed Oscar.

Ravi Kiran cribs about the Chennai Traffic but manages to be on time for every movie show. When not staying in Satyam, he loves reading a book at home while listening to his favorite film scores. Happily works for a publishing company and loves engaging in debates over the quality of Pasta.