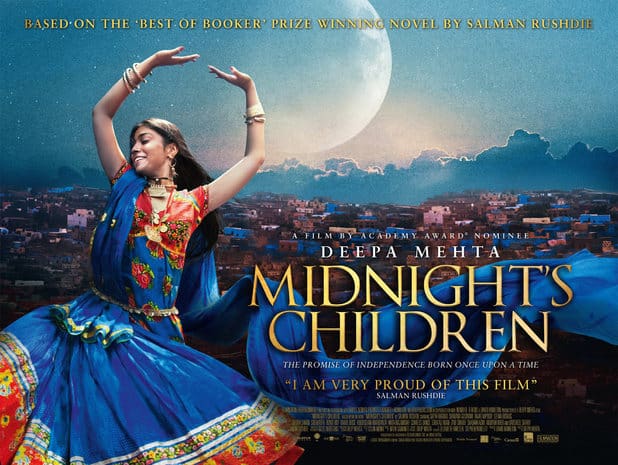 When a movie is adapted from a popular novel/book then our expectations will be normally high. Now it’s time for another such movie adapted from Salman Rushdie’s 1981 novel. Midnight’s Children is a 2012 Canadian-American film adaptation of Salman Rushdie’s novel of the same name. Written and directed by Deepa Mehta. Check our review and see whether it is as popular as the novel or ‘just another adapted movie’.

Storyline: A pair of children, born within moments of India gaining Independence from Britain, grow up in the country that is nothing like their parent’s generation.

I didn’t expect this. In Ahmadabad, people could watch Race 2 twice for some reason to get entertained but the age group I saw, hurdled into the seats. I realized the audience had become more open and come off-age as some may put. Years back, people would only watch and not experiment and movies made from books and ‘true incidents’, though however interesting it may sound was a ‘risk’ for movie makers as well as goers.

Somewhere Salman Rushdie’s epic novel failed to create the electric chemistry or the emotional setup. There Deepa Mehta’s Midnight Children reigns. Rushdie did what he did and wrote what he wrote, some years back to win the booker and many accolades to come, there Deepa disappoints.

Her bold attempt to visualize a book of this cadre doesn’t deserve to win any gold and silver apart from remarks as such, ‘classic movie from a classic novel’ or ‘breathtaking take’, even ‘nobody could recreate Rushdie’s imagination better’. When I saw on the screen that the screenplay was written by Rushdie, I died a little inside. Rushdie is no doubt a prolific writer, but not a man-to-profile-a-movie kind. It only caused more death as the screenplay turned out to be stale. The movie has definitely captured the essence of the novel, but it totally depends on your take of the novel, which by every means is one of the best works ever, yet some might have not liked it that much and some might have read it a hundred times.

The actors gave their best with some amazing performances from supporting stars. Darsheel Safary, as the young Salim is brilliant and the best thing that could happen to the movie. Debutant Satya Bhabha should get comeuppance for his well-adapted role, which he acted with quite an endeavour. Shahana Goswami as a mother embroiled in issues is as clinquant as Ronit Roy’s coruscating take on frustration. Rajat Kapoor as Dr Aziz, Salim’s putative grandfather is amusing. Shabana Azmi as Rajat Kapoor’s wife, Sriya Sharan as Parvati, Soha Ali Khan as Salim’s sister and Kulbhushan Kharbanda as Picture Singh are wasted. Giles Nuttgens gives a dazzling cinematography and Nitin Sawhney’s ethereal score will leave you amazed. “Midnight’s children” by ‘The Soundtrack of Our Lives’ is awesome. The lyrics are awesome as well,

Born at the stroke of midnight on 15 August, 1947, protagonist Saleem Sinai’s (Satya Bhabha) story is one that crosses generations, with a lot of emphasis on a new-born India concept. This so-called ‘midnight child’ is also gifted – like his other brethren born in the witching hour – with a magical gift that allows him to mentally connect to the other children born at the same time. The history of India during British Raj is recounted through generations of Saleem’s family, demonstrating the radical shifts the country faced from the 1930s up until the 1970s. The movie unfolds the connection between Bangladesh, India and Pakistan (through fiction and fantasy delightfully wrapped within the folds of the political scenario and ounces of destiny scoops) the film encompasses scenes of war, liberation, celebration, corruption, romance and mourning in a way which only Deepa and group could do. The ‘meeting scene’ of Shiva, Saleem and Parvati is unsurpassable, all in all. The primo, I had say. Well done end!

This is not your typical movie for a movie-day but a typical Deepa movie. Midnight Children’s gets ‘Lost in Translation’, somewhere. Artistic like ‘Dhobi Ghat’ and socially impactful like the ‘element trilogy’ from the same hood. This movie can wait for DVD’s days when you need to know why movies made from books don’t rock the jesses out of you or never fare better than the books itself. (Exceptions might be there like ‘3 Idiots’ which was adapted from “5 Point Someone” OR “Slumdog Millionaire” from Vikas Swarup’s ‘Q and A’).

I watched the movie, which seemed disconnected and lacking life, contrary to Rushdie’s magnum opus, with an amused look. Somewhere, a family from the audience left after the first half and the people who were sitting on front row sat there, mesmerized, even as the movie ended and people rushed out. I heard someone saying “Satirical it was. Why would they do this to such a good book?” Still, not THAT bad I had to say. Someone made a movie out of an ‘infilmmable’ piece of masterpiece. Not bad.

Short Link : http://movie.sc/1pJTTuV
Next
Part Of