Honestly this is the only TV series I watched completely (as of now) and I’m eager to watch the Season 2 no matter how long it takes. It has all the genres I love – Thriller / Crime / Mystery / Suspense – This is something every TV Series freak should watch. 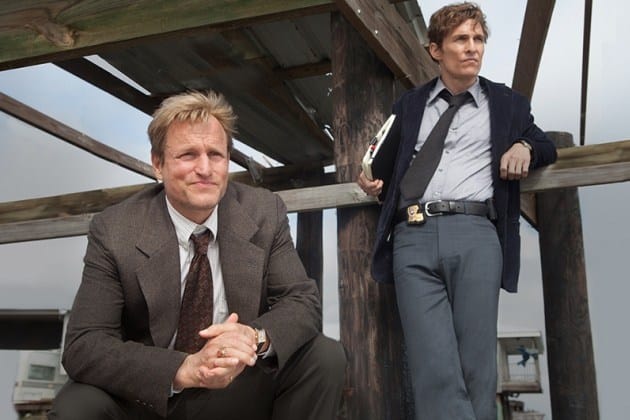 Nic Pizzolatto is not even revealing his plans to HBO for Season 2. But we managed to peek our nose here and there collecting some possible assumptions.

Matthew McConaughey (and even Woody Harrelson) won’t be back. Yes, I must admit, their combo is one of the best and I’m glad they managed to prove it with just one season. But unfortunately they are both mainstream actors and they are stuck with their movies. Harrelson busy with “The Hunger Games” movie series and McConaughey, as you know, working on Christopher Nolan’s “Interstellar”. So they both needed a break or they both deserved a break.

Pizzolatto told Buzzfeed that, he’s “been reading about the last 40 years of Southern California government.”

Even though I’m sad that Mathew is leaving, I was extremely happy when I saw the headlines that Brad Pitt might replace him in Season 2. Remember his brilliant detective role in Se7en (1995) along with Morgan Freeman? I want something like this for True Detective. I guess a male version and a female version will be available for this. Yes, two detectives like the first season. Rumours say we’ll be having Brad Pitt for Season 2 and also a female detective to accompany him. Hope for the best!

Cary Joji Fukunaga directed the entire first season and it came out pretty well. But for Season 2 they decided to experiment with two directors.

Pizzolatto told Buzzfeed, “We don’t have any plans to work with one director again. It would be impossible to do this yearly as we need to be able to do post while we’re still filming, like any other show. There’s some great guys I’ve consulted, and we’re all confident we can achieve the same consistency.”

I guess this one is something more intriguing, what happens in Season 2? What kind of crime it could be?

True Detective TV Series creator Nick Pizzolatto said this in an interview, “This is really early, but I’ll tell you (it’s about) hard women, bad men and the secret occult history of the United States transportation system.”