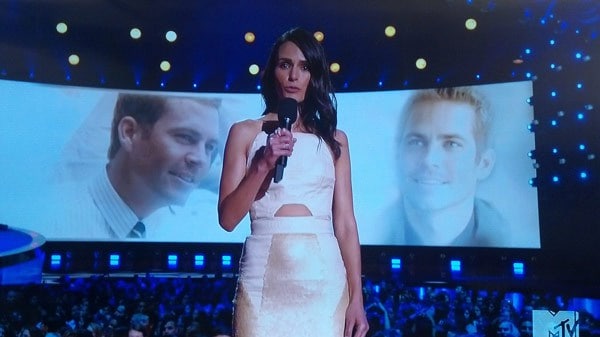 We have been watching “Fast & Furious” franchise like a TV series, it is still one of the best racing movies. We all felt terrible when we heard that we are going to lose a valuable character forever. Paul Walker faced a cruel accident (car crash) and unfortunately he died along with his friend. Paul Walker’s death was so shocking and tragic.

Watching this “Paul Walker Tribute Video” by MTV Movie Awards (2014) reminded us that he is more than just a cinema person. They were kind enough to pay a heroic tribute to a fine actor who will be remembered for his on-screen attitude and philanthropic works.

I think this should be the most touching moment of the MTV Movie Awards. Jordana Brewster, Paul Walker’s “Fast and Furious” co-star, introduced the tribute video. She said, “He was humble, he thought about others. For Paul, every day was an adventure to be tackled and he wanted to make a difference in this world. He was just a really good guy. His charm, wit, spirit, and his beautiful smile will always live on because he will always be in our hearts.”

This video contains clips from various movies Walker starred, they also included some pictures and videos which were took during his philanthropic work.

Paul Walker’s favourite and close co-star – ‘Vin Diesel’ – has few words to share regarding his friend.