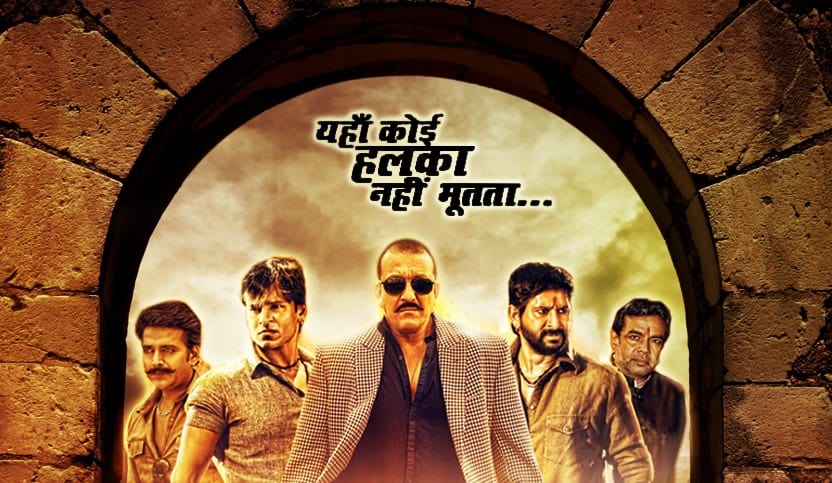 If you liked Dabangg in any way, then this film isn’t to be missed. It’s inspired by Salman Khan in a way (in one scene Arshad Warsi says, “Tere pichhwade mein itni goliyan marunga ki tere bachche peetal ke paida honge.” Of course, the movie holds its own stand but sadly, that is for the unauthentic bloodfest and the story never justifies Gaziabad in any sense. ‘Sense’ reminds me that this movie is anything but sense-making.

The film evokes laughter, exasperation, and fear, but in all the wrong places. The high point of the movie when I wanted to say, ‘paisa vasool’ were the item numbers and the title song – which is as inspiring as ‘Keh ke lunga’ of Wasseypur fame and ‘Hudd Hudd dabangg’ of Dabangg.

The film narrates the story of an educated do-gooder Satbeer Gujjar (Vivek Oberoi), who is forced to replace his pen with a .22 calibre pistol when he is falsely implicated in an attack on local gangster, Fauji (Arshad Warsi). Pritam Singh Chauhan (Sanjay Dutt), a cop with a shady reputation, who has been charged with dealing with the warring families. Said to be based on the gang war between Gujjar’s of 90’s, this movie typically teaches you history, in a bloody sense. From here on the story unfolds with the elements of suspicion, betrayal, greed and politics mixed together, and unveils lots of action, thrills, bloodshed and violence in the 2 hour 20 minute-long movie.

Paresh Rawal is a surprise package in the movie. (I debated a lot to not let you know this but again – at least this revelation will help somebody to go and watch the flick!) Ashutosh Rana – you need to take a break. Seriously. Small-screen star Eijaz Khan showed the audience today why small screen actors should restrict themselves to small screen rather than ‘Zila Ghaziabad’. Ravi Kishan as a villain rocks the boat sometimes. I wish it was always! Chandrachur Singh has done a cameo appearance.

Talking about the side kicks and supporting actors, I don’t want to rate the ‘main’ heroes here. 😛 Vivek is soon going to retire after this. I hope. Here is absolutely no chemistry between him and his on screen beloved played by South hottie Charmy Kaur. The actress is not going to be seen for a long time in Bollywood, it seems. With his pseudo-idealist hero take is lost in the bloodshed. ‘Saajan’, ‘Khalnayak’ and even ‘Munnabhai MBBS’ reminds me of the good old days when actors like Sanjay Dutt weren’t so wasted.


Talking of ‘Munnabhai MBBS’, Arshad warsi – we loved you as circuit which love, in Zila Ghaziabad is short- circuited. I think, Arshad did what the script demanded of him. However stupid. And so, I won’t blame his acting skills for this. Sunil Grover, who plays Fakira, a wise minion who hatches the conniving plan that sets off the gory chain of events. Divya Dutta and Minissha Lamba have no screen presence.

Directed and penned by Anand Kumar, a talented director in a profound way – Zila Ghaziabad was made to be a masterpiece like ‘GOG’, which turned out to be quite Dabanggy. The cinematography is dull and red. But thankfully the film has been edited decently. One thing which I didn’t understand is why peanut earning Vivek showing off his Ray Ban’s? Too obvious for logic. Logic is the baseline and frontline of a movie and when in a rural Ghaziabad, you have a car with Maharashtra’s license plate, either the car has travelled too far to be in another state or else logic has.

I would still ask anybody who needs a serious dose of action to go watch this movie….it is quite an assumption that you may end up liking the movie, for a large number of audience took the logic-flawed and flayed ‘Dabangg’ and its sequel seriously. Wait for DVD but the blood might just spill out of your set for there is too much of masala killing.