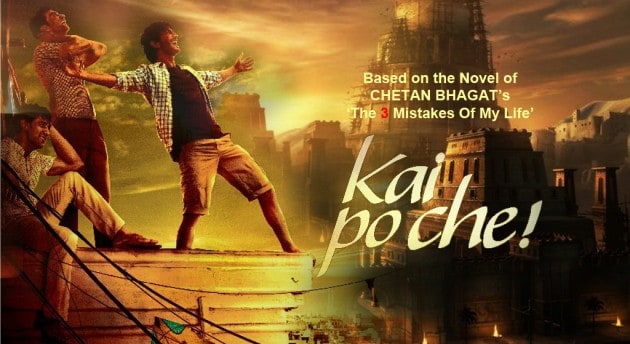 Earlier Chetan Bhagat’s “Five Point Someone” was loosely adapted by 3 Idiots in 2009. Now it’s turn for another book of his to be made as a movie. Lets see whether “Kai Po Che!” is as EPIC as 3 Idiots or just another movie-based-on-novel. Earlier we reviewed Midnight’s Children which was an adaptation of Salman Rushdie’s novel.

“Kai Po Che” as the call goes in Gujarati language, is the shout of cherish of victory during kite flying festival. A beautifully carved movie from one of the best sold novels in India by Chetan Bhagat named “Three Mistakes Of My Life”. A wonderful work by Abhishekh Kapoor, another cup of tea to stir the Indian Youth.

Despite no big star cast, Kai Po Che stirs the viewers’ hearts, it’s an uncommon display of strong friendship and the springing spirits of the Youth phase. The movie tries to tie us, we the Indians as a whole into a knot leaving behind the bars of castes and religion.

The story is all about three friends Ishaan, Omi and Govind dwelling in the city Ahemdabad. The bond between them is very strong, but their friendship undergoes dynamic tests and their relation is successfully able to fight the storm of Religion and Politics (based on the shakingly sad Godhara Kand issue in Gujarat, 2001). Though they lose one friend’s life as a sacrifice. Their friendship is eternal.


The first half of the movie displays the calm and ordinary life in Ahemdabad. The three friends are tightly bonded as brothers for life and unitedly struggle to make their life settled and get success. Ishaan, Omi and Govind open a Sabarmati sports goods shop and a sports club, where they sell sports equipments and train Children who have God gifted abilities in sports. Ishaan is a cricket freak and has even played cricket till district and Ranji trophy in his school days. Govind is a tutor of maths and had scored 100/100 in exams. Omi is a son of Pandit, and his maternal uncle is a strong politician.

During the course Govind has been given a responsibility by Ishaan to train Vidya (Ishaan’s sister) for maths examination. This is how Govind and Vidya fall in love and have a secret affair. Ishaan is busy training a Muslim boy Ali who is God gifted player in cricket, and Omi joins the campaign of his Bittu Uncle’s political party. Life seems to be wonderfully awesome, and things are going on right track. Story begins now.

The music and songs are heart touching, hope we all have heard those lovely tunes. “Manja” which gives us message that nothing is as precious as relations. “Subh Arambh” shows the Gujarati culture of celebrating success. “Mithi Boliya” says us about the lovely language of Gujaratis, their kind and sweet nature. The cameras have vividly displayed the colours of Ahmedabad and the majestic fort of Diu. I specially liked the fort scenes and the sea beside. The sound effects during the scenes of riots can give u goose bumps, and a tear or two of pity.

Raj Kumar Yadav once again proved his skills in acting on the silver screen. The small screen players Shushant Singh Rajput and Amit Sadh has proved to be very well spraying the blossom of refreshment. And how can we forget Amrita Puri, she tints the movie with grace which is all boy’s movie. Never forget that support casts helped the movie to life.