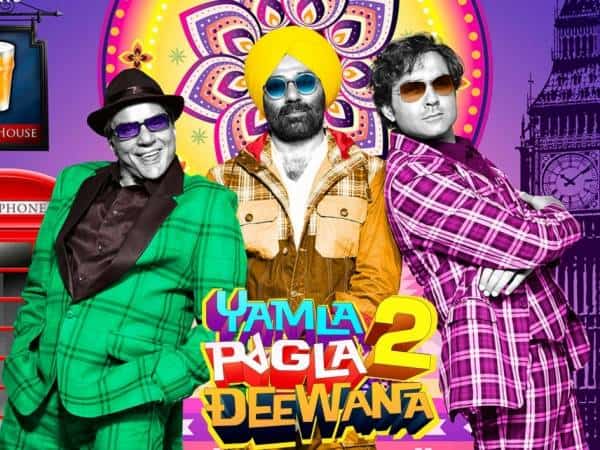 The deol family is a veteran. I am waiting for the day when the Bacchans come together for a movie. How would that go? Well, coming back to our movie of the week, it has been so far true to the predictions of trade Pundits. This second show of craziness is new and lively.

The story is packed with punch lines and usual your-drama-queen moments with everything which we have seen and heard before. But, for people who haven’t watched the first take, go and you will feel smiling from ear to ear, because there is nothing to laugh about. Funny bone is a part which the trio cannot succeed in trickling unless you are a 10 year old with a comical view about everything around you.

Dharam (Dharmendra) and his son Gajodhar (Bobby Deol) resurface as our favourtite con men with conning a UK-based businessman Yograj Khanna (Annu Kapoor) with the con caper dad’s wish to marry Khanna’s daughter Suman (Neha Sharma) to Gajodhar. Palwinder Singh Dhillon (Sunny Deol) works as a debt collector in the UK, in love with Yograj’s other daughter Reet (Kristina Akheeva). there palwindr finds out that as promised by them in the climax of Yamla Pagla Deewana movie, his dad and brother are far from becoming saints as they have already started conning yograj. The three Deols then plunge into a crazy, action-packed, impish and over-the-top sequence of events. Rest, assured.

It is this certain factor in which bollywood is still behind. The fact that good actors are made to look like dufus and with meaty cheesy roles, they lose sensibilities. This is one movie where the talented trio is stooped to the level of bad comedy. The chimp and the cars and the utterly disgusting slow motion looks- well, you could delete all this from the movie and the movie had make sense. I respect Dharmendra’s acting prowess. While his sons pull off their own sweet deal – the actresses are show pieces. Other supporting casts are like cats. Cute and angst but useless. Had the director been equipped with a much better script, he could have perhaps treated a nonsensical film with élan. Actors such as Anupam Kher, Johnny Lever and Sucheta Sharma come across in avatars that are mindless to the core. The ending with sumo fight is the best part of the larger than life movie.

Brothers Sharib Sabri and Toshi Sabri have been entertaining enough. “Sadi Daru Da Pani “is awesome. The music is Punjabi styled and full of nonsense throw INS but still, the music doesn’t fare well than its part 1. Where item songs were promoted well and received with fun fare.

A movie where you can go back without your mind or any expectation, then you had appreciate the effort out by the trio. A word of caution – go easy on the jokes, you might have heard them before. If you liked part 1 then you will enjoy this madness more, that is for sure!