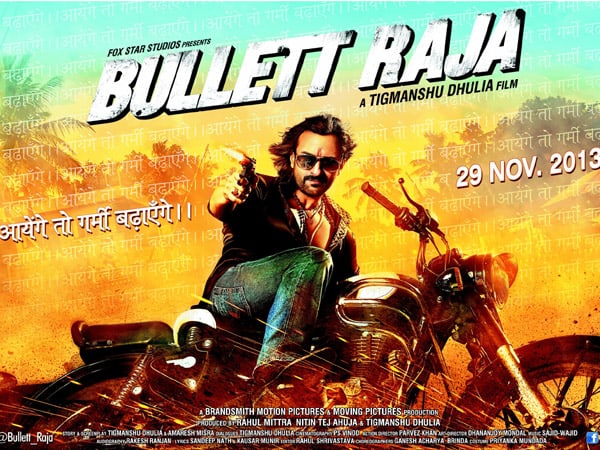 The posters of this movie boast that this package is from the director of hits such as Saheb Biwi Aur Gangster films (2011, 2013) and Paan Singh Tomar (2010), and when this happens – you should know that the movie is leaning on some previous ‘better days’ to attract attention as it doesn’t hold the key to success all by itself. Bullett Raja is seemingly fast and before you want to get bored, it happens, happens in a very phenomenal way. There aren’t any pulp actors or a ravishing performance, yet, Dhulia makes you feel elated at the right turns. When people are still recovering from the super-effect of Ram-Leela, this movie could have had a better timing and promotion. It’s not still late, but what the heck.

Bullett Raja is an Hindi action film written and directed by Tigmanshu Dhulia and produced by Rahul Mittra, Nitin Tej Ahuja and Tigmanshu Dhulia, under the banner of BrandSmith Motion Pictures and Moving Pictures. The film is presented by Fox Star Studios. The film will feature Saif Ali Khan, Sonakshi Sinha and Jimmy Shergill in leading roles, whilst Chunky Pandey, Ravi Kishan, Gulshan Grover and Vidyut Jamwal will feature in pivotal roles.

Raja (Saif Ali Khan) and Rudra (Jimmy Shergill) are best friends for life. The political players of the state promise Raja help in a revenge. Raja’s opponents are a police officer (Vidyut Jamwal), who takes a group of dacoits in Chambal a politician’s former flunky in hibernation as Radha (Ravi Kissen) and the politician himself (Raj Babbar).

Saif says, “Maa ne kaha tha beta kisi ka dil na thodna. Toh humne dil ko chodke sab kuch thoda” and you feel he is mimicking Salman khan’s dabbangiya style. Well, Saif has stayed neutral in most of his movies and in Bullet Raja he clearly doesn’t want to get judged. Dhulia unveils a narrative over which he has remarkable control and somehow, Saif fits the bill in the story perfectly. Sonakshi Sinha in a brief role does what is required for the part. Nuff said. The script is vintage Bollywood. Saif cultivates an earthy body language and lingo to make that formulaic Bollywood antihero look appealing. The dialogues are pretty raw. Kissen and Babbar were excellent. Technically, the film has some finesse, but nothing, including stunt direction, editing or cinematography is dazzling enough to remember.

well done Dhulia and team.  For somebody who had too much of romance week or lovey-doveiness, you will find Rajaji refreshing. a pretty decent affair,I had say.