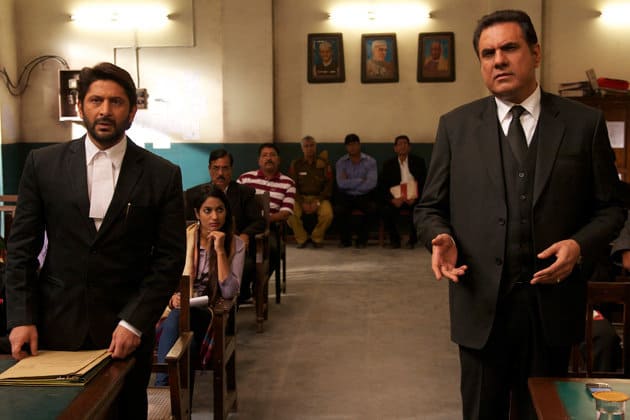 Being a law student and personally an appreciator of Boman Irani, who needs no introduction, the man who made us see that looks-can–go-eat–grass-its-high-time-acting-matters, bunch of us watched the first show, first day and the trailer with the news of Meerut lawyers filing for ban of Jolly LLB, accusing it of defaming the profession and depicting lawyers as flies with no morals. We were pretty excited.

Now as I sit writing the review, I ask myself WHY? ‘Appeal’ spelled as ‘apple’ and Jolly telling Lashkar-e-Taiba terrorists that he’s Maskhar-e-Taiba is all presented in a very comic fashion. Even there are some moments where you can applaud the comic twist and laugh a bit. Then there those moments for which our director never disappoints – the humanity of souls which are homeless and in a very poor condition. It’s no humour yet to help the souls with showing the legal system as such a huge mock-a-doodle-do. Everything smells unreal, with real life set and court files.

Jolly aspires to be a popular lawyer, who moves from Meerut to Delhi in order to enhance his career opportunities with support from his ladylove Sandhya (Amrita Rao), who is a school teacher who lives a humble life. Besides her, his brother-in-law (Manoj Pahwa) keeps his hopes alive. Jolly meets his inspiration, high-profile advocate Rajpal (Boman Irani) in a court room and expresses his awe to his idol and admires him for his intelligence and courage to fight for ‘justice’. Dreaming to make it big, with a very high profile case in hand now Jolly sets his eyes on media headlines, TV shows and interviews. Very late in the movie, after interval, he does realize the value of fighting for justice, about which he has learnt his whole life. Now, starts the trip to equity, justice and good conscience. He overthrows the big shot, money eating lawyer and gains love, respect back after a throw-back.

Though the movie has a different agenda which it rather sets and pisses off with, I can assure you one thing-the story doesn’t makes you yawn, but the content does.

Boman Irani proves his credentials and proves he can carry a film firmly on his shoulders alone. Amrita Rao has made no such comeback, as promised and is totally wasted. Saurabh Shukla is incredible and nobody would have done his job better! All other actors, especially Manoj Pahwa, have done a great job. After ‘Phas Gaye Re Obama’ released in 2010, filmmaker Subhash Kapoor, through his latest starring Arshad Warsi and Boman Irani, has ripped the Indian judiciary apart in the most satirical way possible. Now, Arshad Warsi as Jolly has tried his best to be a hero, despite his paunch (showing through his suit) and bad romance with Indian legal system. Filmmaker Kapoor couldn’t have thought of anyone else but those to play their respective characters, for they simply look tailor made for their roles. Veteran actor Mohan Aghashe, Mohan Kapoor and ‘Kallu Mama’ Saurabh Shukla are fabulous.

“Mere Toh L Lag Gaye” by Bappi Lahiri is good to the ears. “Daru Peeke Nachna” is also grooving good. The background score is not bad! The court room sequences will certainly tickle your funny bone.

Cue twist in tale, Jolly’s moral dilemma, long boring lecture from shrill-sounding girlfriend, sure-to-get-you-sniffing scenes with ‘a homeless man asking Arshad to piss somewhere else as its the place where he sleeps with his family’ scenes and an extremely simplistic portrayal of the process of getting justice in the Indian system. The Himesh Reshamiya look alike fighting for his music rights and all that humour will pass off as a bad hangover. The worst part is that a PIL cannot be filed in a district court, and the whole movie is all about PIL’s being filed in lower courts! I mean, nobody, NOBODY ever thought about that! 😛

Go for it but beware, it can just be a bad bad idea. I still don’t understand why this movie could have done a ton better and yet it was dished out like this. It had good previews, promos doing well and an audience to die for, such a humorous drama…and YET. Sad.