Last day I watched Irul on Netflix – a Malayalam movie that has left its viewers impressed, perplexed, or in awe. Irul is a nerve-racking psychological thriller that is a must-watch in 2021; the movie leaves a lot of answers unanswered. The answers that were never provided to the audience prove how the movie’s script was ambitious on getting to the nerves of the audience in keeping them engaged in such a thrilling way before unpacking the killer’s identity. If you want to know more about the ending of Irul – let me explain.

The movie revolves around the story of Alex, who is the main protagonist, Alex’s girlfriend Archana, and the mysterious man only who by the end of the movie also turns out to be the serial killer mentioned in the book written by Alex named ‘Irul.’

While the first half of the movie looked completely normal, the thrill started increasing with the second half of the movie. A lot of questions were raised in the middle of the movie that was answered by the end. The story mainly revolves around Alex and Archana, Alex is a writer and has written the book “Irul” which is based on the murderer who murdered five women. The body of the women left in the basement is the plot twist, the book was never completed as the murderer was left unrecognized. On the other hand, Archana is a lawyer and also the girlfriend of Alex.

After dating for three months, both of them plan a romantic getaway from their hectic, tough, and regular lives and spend some quality time together, only to end up in a townhouse in the middle of nowhere when their car breaks down in the middle of the rain. Now, they could easily call a mechanic, but neither of them had their cell phone as according to the fact that was made between them before coming to the trip mentioned that they would not be bringing both of their cell phones as it is a major distraction of that busy lives. Yes, Alex convinces Archana to go with him to the middle of nowhere without letting her carry her phone. So much for love! When their car breaks down, they take refuge in an old creepy bungalow – greeted by Fahadh Faasil, their magnetic host.

Until this moment, the movie would look like a normal thriller movie to you, but after this scene, when they stumble upon the townhouse, things get interesting. Throughout the second part of the most strange thing about this movie was the body movements between Unni and Alex. Like whenever he said something about the house or the belongings, there was a twitch in Alex’s face that continued till the dead body of the unknown girl was found in the basement. That is when Alex catches Unni as a perpetrator living in his house. The rest of the movie reveals that Alex is convinced that Unni is the one who killed the girl in the basement and is also the mysterious killer who is mentioned in Alex’s book Irul. On the other hand, Unni pretends to be a burglar and not the murderer, puts thoughts inside Archana’s mind, and starts considering Alex as the mystery murderer.


There was also a moment when Unni talks about the murders in his book as he claims to be one of his avid readers, but he kept talking about six murders and not five giving hints on how he himself is the killer. The movie ends abruptly with Archana firing the gun at Alex by mistake – manipulated by Unni’s psychological tactics when creepily Unni reveals himself to be the murderer who killed the five women. The movie ends after showing a trail of paper cutting to establish the three more murders than he did in the house. His sixth murder was of an unknown girl whose body hung in the basement, and his seventh and eighth bait was Archana and Alex. I believe that Unni completely planned the murder of Archana and Alex – probably to take revenge on the fact that Alex wrote a book about his murders. The execution was really interesting – as the serial killer does not kill men- he manipulated Archana into killing Alex.

The irony is that Archana is a lawyer, yet she cannot tell the lies from the truth. This just goes on to elucidate how faulty human judgment can be and how the elements of the judicial system may not be reliable as well.

By the end of the movie, I did have a few questions, though!

For example, how did Unni know where Alex lived and how did he know that no one will be staying in that house?

Another question – why did Alex not question Unni’s presence right from the start, knowing he was an intruder in his own house?

How did Unni know Alex was going to propose since there were six rings ready to present?

The last question that affected me the most was that Unni kept a blank paper with the page number 394 in his pocket. Why? Why did Unni keep a strange paper with a strange number in his pocket, or was this the last page of the novel Irul written by Alex, and if it was, did you just keep the page to complete the incomplete story. Irul’s ending is perplexing.

I feel like it is an attribute of all great movies to leave some questions unanswered, but I hope that you enjoy the movie nevertheless. 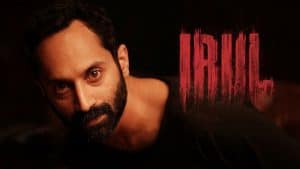