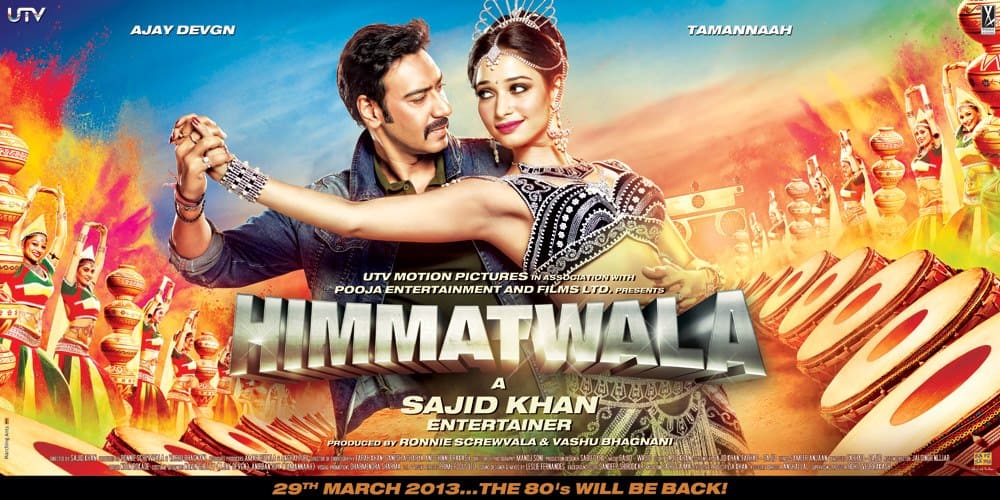 Sajid khan is going to have a rough year it seems. Band baj gayi unki toh! The need of funny, light-hearted movies these days is apparent but THIS!

Himmatwala (2013) is a Bollywood action romance film directed by Sajid Khan and jointly produced by UTV Motion Pictures and Vashu Bhagnani. The film features Ajay Devgan opposite Tamannaah in the lead roles. It is an official remake of the 1983 blockbuster of the same name, directed by K. Raghavendra Rao starring Jeetendra and Sridevi.

This movie made me squirm uncomfortably and for most parts, I was not paying any attention to the bad screenplay and worse – the actors, who look like mediocre crisis hit jokers in an Aruban circus. Where you don’t know if Aruba is a country or that it’s famous for its circus play, which consists of a tiger fight sequence, which isn’t menacing neither entertaining like most of the movie.

The remake of the 1983 blockbuster of the same name, directed by K. Raghavendra Rao starring Jeetendra and Sridevi, this movie hasn’t changed a bit of the concept of the story of a poor and wronged woman’s son, who returns from the big city to avenge his father, a honest school teacher. Wronged mother, Savitri raises her son, Ravi to be strong enough to avenge the brutalities they have faced. Added with a Shakespearean sprinkle of Romeo and Juliet, enemies Ravi and Rekha fall for each other giving the film a love angle.

The boisterous melodrama of 80s is born with pomp pomp and fare, but unfortunately, the director doesn’t even succeed to do anything good for the film. Himmatwala is full of over-the-top acting, irritating melodrama, lame jokes, mindless entertainment and a few awkward dance steps.

Films like Zakhm, Omkara, Hum Dil De Chuke Sanam, Devgn had marked his territory. Few days back, when I was reading his interview in a local newspaper, I was surprised to see how excited he was about this particular remake. Maybe after seeing the final print, he wanted us, audience to get fooled into watching such a pathetic film. I would assign this as the worst remake ever. Ajay has a serious quintessential fan following, where nobody can beat the die-hard religiosity his fans have. Respect. But, herein and after, I doubt that they shall be not ridiculed forever if they say that devgn is the favorite hero. The word ‘hero’ has been given a new name by the actor in hits movie- that is ‘joker’. Tamanna Bhatia can never imitate Sridevi. Come to think of it – she is nowhere in comparison. Though I had given her points for having the voluptuous body in the frame so awesomely, that you sigh at her beauty from afar. But, that is it. Beauty plays its role and Tamanna doesn’t go farther. Paresh Rawal, Mahesh Manjrekar, and Zarina Wahab are wasted.

The mother-son drama, the hero-villain conflict, the heroism… even Ajay’s introductory sequence is straight out of 1980s. One who might have watched Om Shanti Om might know the value of the 70’s and 80’s, well, with himmatwala, you just sit and ask “WHY WHY”.. It’s the typical good versus bad saga loaded with so many actors that it practically ends up giving yo-yo’s in the ransacked bar. The only silver lining is the presence of A-list stars and of course, the hype surrounding the film, which might attract footfalls in mass-friendly circuits initially. In director Sajid Khan’s trademark style, he botches up an already over-the-top 80’s original, by the same title, with innumerable, nonsensical twists and turns.

I had asked you to download or buy the original ‘Himmatwala’ and watch it. That movie you bet, you can watch hundreds of times, unless Ang Lee had done a better job in the 80’s with the tiger. AND if by chance you watch Sajid’s remake, than I bet, you can also write a review wherein you can claim full to critic bashing for the most preposterous actor to act in a remake – Ajay devgn.