Tom Hardy is an incredibly versatile actor who has been receiving a fair amount of attention for his roles in Nolan’s The Dark Knight Rises (2012) and Mad Max: Fury Road (2015), in addition to starring in Christopher Nolan’s Inception (2010), Guy Ritchie’s RocknRolla (2008) and Alejandro Gonzalez Inarritu’s The Revenant (2015). His skill is pretty well documented in Hollywood by now, what with Venom coming around the corner with him in the titular role as Eddie Brock.

But Tom Hardy has shown his acting prowess in three brilliant movies that haven’t garnered as much attention as they deserve, at least in the commercial sense. These movies have Hardy playing the central role, or one of the protagonists, and owning it. Not only are these movies buoyed by his incredible performances, they are also brilliantly written and should be watched at least once by every cinephile. 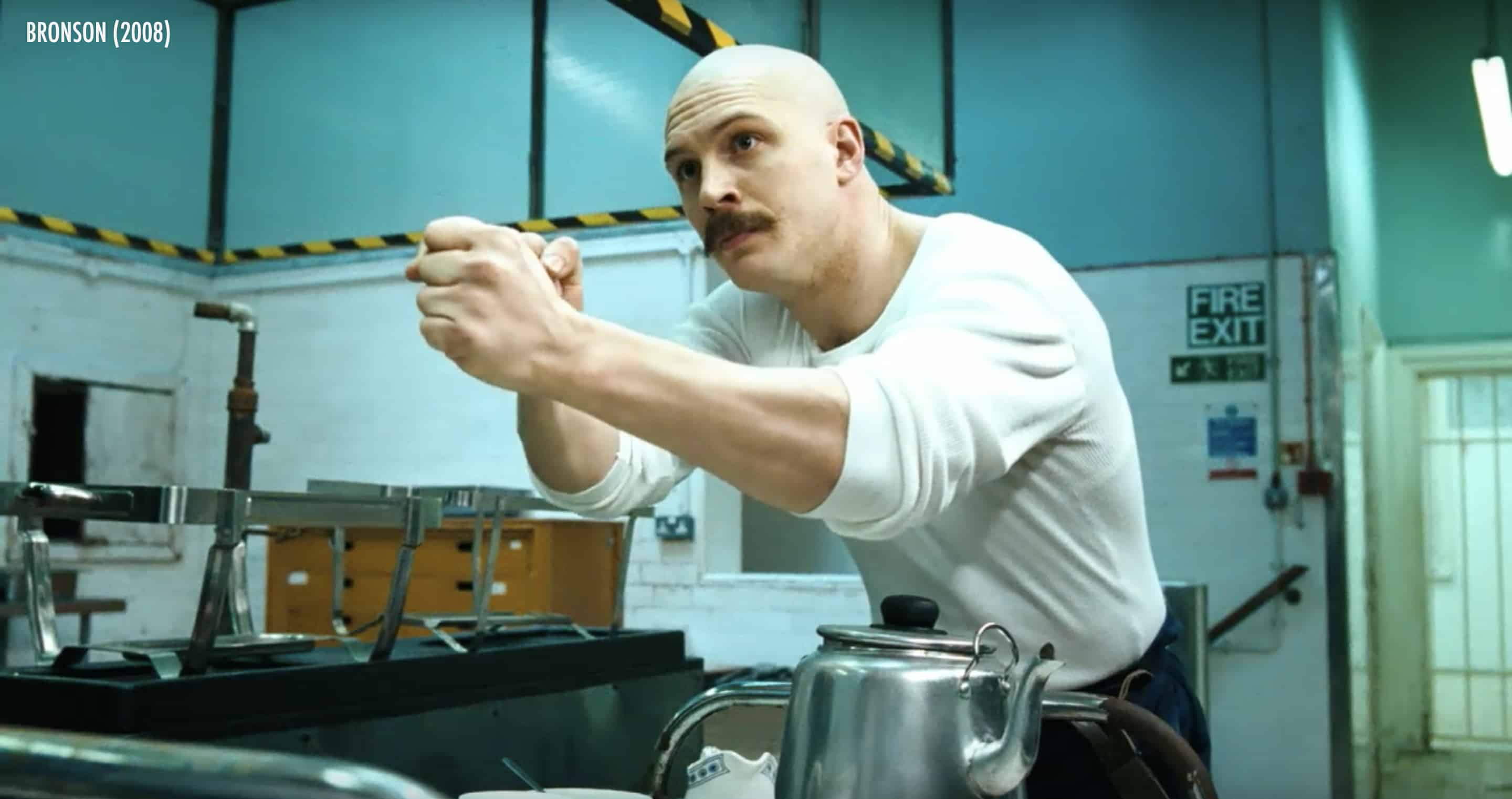 Directed by Nicolas Winding Refn (who became famous for his critically acclaimed Drive, which also happened to be a commercial success), Bronson is beautiful, darkly comic and twisted take on the life and escapades of the British criminal Michael Peterson, who later took on the name of Charles Bronson. Charismatic, self-obsessed and deftly charming, Hardy’s portrayal of Peterson captures an ever-flammable spark of seemingly random madness. Amidst the highly saturated neon lighting used symbolically by Winding Refn, Tom Hardy transforms into Peterson. He put on a lot of weight in the form of fat to look the part, and his presence on screen is unmistakably large. We’re almost tricked into liking the character of Peterson, thinking of him as a hilarious, chaotic and inscrutable enigma. Yet it’s the moments between where we see the wanton violence, both artfully and sickeningly shot or the rage and insanity seething beneath the storyteller’s exterior, that we’re given an actual peek into the extent of Hardy’s skill as an actor. There’s a story that says that the real Michael Peterson was initially not keen on Hardy playing him in the movie, but was later so impressed with his ability at eliciting his mannerisms and his dedication to the portrayal that he shaved his trademark mustache off to use as a realistic prop. The movie doesn’t offer us any explanations about why the protagonist does what he does, it lets us observe him and his antics, and we end up not thinking much of the people who are victims of Bronson’s violence. We end up becoming spectators to the show of violence and chaotic evil displayed as theatrics in the movie, and what a grand show it is!

We’ve seen many heartening sports dramas, even more so in the martial art world. The entirety of the Rocky series has provided us with gems to remember. Warrior stands out even among these classics, with powerful performances from Tom Hardy and Joel Edgerton in the lead roles. Tom Hardy plays Tommy Riordan, an ex-Marine who turns up at his estranged father (played by Nick Nolte) Paddy’s house, asking him to train him for an upcoming Mixed Martial Arts tournament with a five million dollar grand prize. We discover that he’s not on good terms with his father, whose last name Conlon is given up by him, choosing instead to go with his mother’s maiden name. We’re also shown Tommy’s elder brother, who is a high-school physics teacher Brendan Conlon (played by Joel Edgerton), who happens to be a former MMA fighter who moonlights as a fighter for money, near a local strip club. He is fired when school authorities discover this. As the foreclosure of his house and the eviction of his family closes in, he chooses to participate in the tournament, as well. The relationship between the brothers and the relationship between father and sons is a strained one. Tom Hardy is amazing as the incredibly strong and curt Tommy, and his physique in the movie makes us believe he could bulldoze through people with ease. The spite he has for the father and his brother whom he feels abandoned him is almost palpable with every utterance. We discover the reasons for this hate. Joel Edgerton almost steals the show, however, acting as the tenacious, technical fighter and family man. Warrior is not just a movie about the sport of MMA but also about the familial bond and a study of making amends. Although the camera movement during fights is a bit too excited and shaky for my taste, it overcomes any minor faults it may have with a spirited performance from the leading actors and the supporting cast, culminating in a finish that makes journeying through the emotional tumult of the Conlons worthwhile.

Through the entire duration of Locke, there’s just one person on-screen. Tom Hardy proves that if that one person is him, he can keep your attention fixed for the length of a movie that revolves around one man in his car. Written and directed by Steven Knight, Locke follows Ivan Locke, a successful construction foreman working for a firm which is about to do a very important and large concrete pour (constantly talked about as being the largest non-nuclear pour in Europe), whose life and career is turned upside down as a result of a phone call stemming from a poor decision he made. He converses with his colleague, his family, a lady going into premature labor as a result of their having a one-night stand, and various authorities as he travels from Birmingham to London, to be with the woman who is giving birth to his child. More than being just a one-man movie gimmick, Locke shows us the repercussions and consequences of a man’s ill-thought out, a spur-of-the-moment decision can have, however diligently he may have worked to get to the place he is in. Tom Hardy almost convinces us he’s Ivan Locke, a person knows he has messed up and does not want to go through life making the same mistakes his father committed. He’s believable in his anger, his sadness, his despair, and his act of taking responsibility for his mistake.

Which of these movies did you like? Do you have any more movies of Tom Hardy in mind that you’d have liked to see on this list? Leave a comment below and let us know your thoughts!