‘Love, can’t you see I’m alone
Can’t you give this fool a chance
A little love is all I ask
A little kindness in the night’
– Cliff Richards, Ocean Deep

The Shape of Water echoes the emotions of the Cliff Richards number. The latest film by Guillermo del Toro takes us ocean deep and only lets us explore what lies underneath the surface of love, even if it happens between a human and a creature we cannot understand. We are introduced to this surreal universe by exploring what appears to be a shipwreck only to realize that it is not a world submerged in water but water allowed to fill the world, to nurture and shape love. 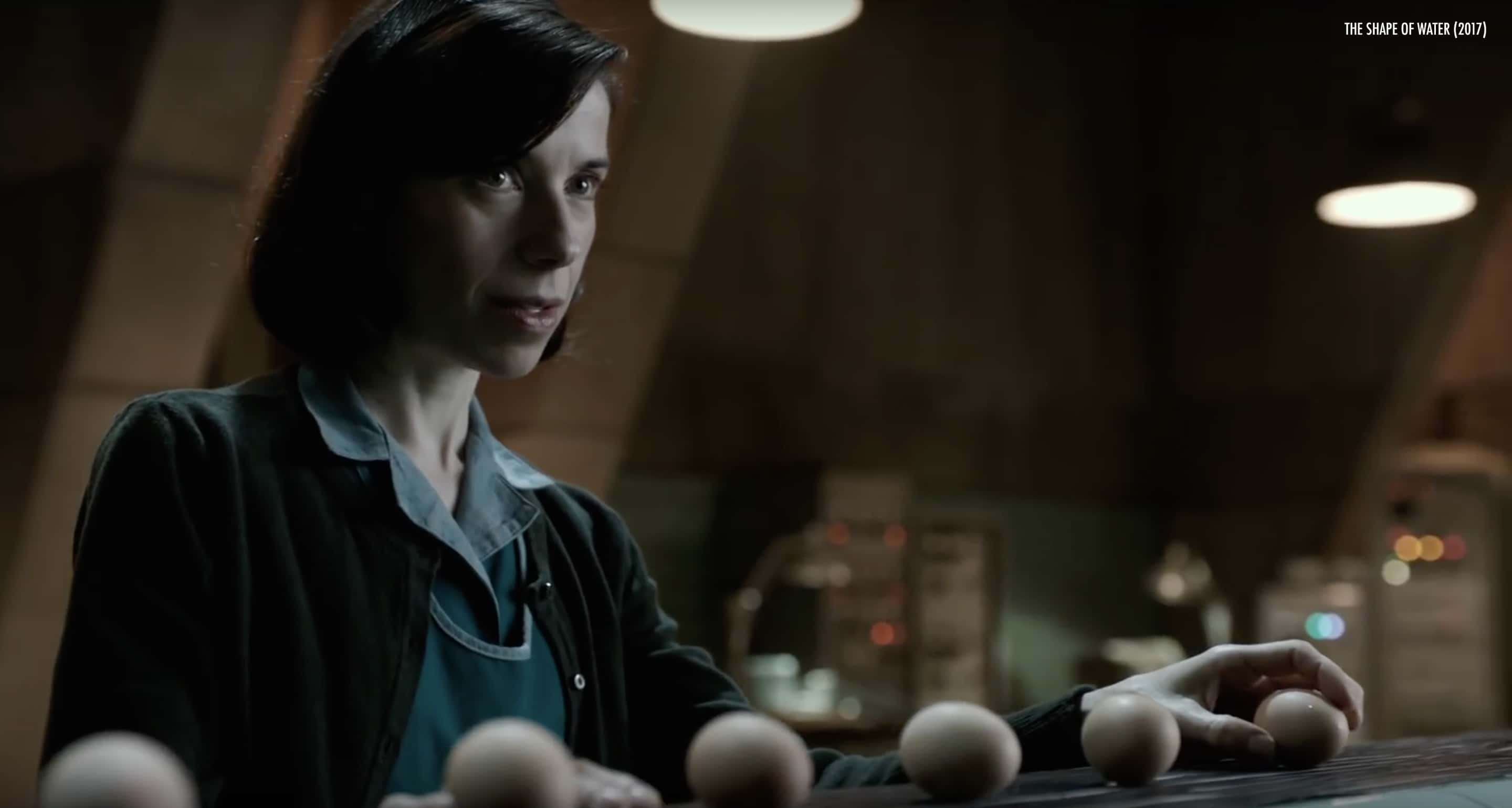 Lost in a daydream, seeking for love

We see a young woman following her daily morning ritual – waking up from behind an eye-mask, filling the bathtub, tossing the eggs to boil and keeping an egg-timer while she masturbated to feel the touch of love. We gradually learn that she is an orphan, aching for a loving heart. Life has not gifted her voice, but she enjoys the sound of her heartbeat as much as tap-dancing in the hallway. She wants to be a part of the world even if the world seems to be distant from her. Her eyes shine with hope as she waits for her daydreams to become a reality. She is locked in her world, whistling to a tune in her mind, making one wonder whether is she the one dreaming or are we the ones dreaming? We learn that her name is Eliza from her grey-haired bald neighbor, Giles (Richard Jenkins). The two manage to eke out a friendship while living in a movie theater that lays the foundation to their dreams and ambitions. 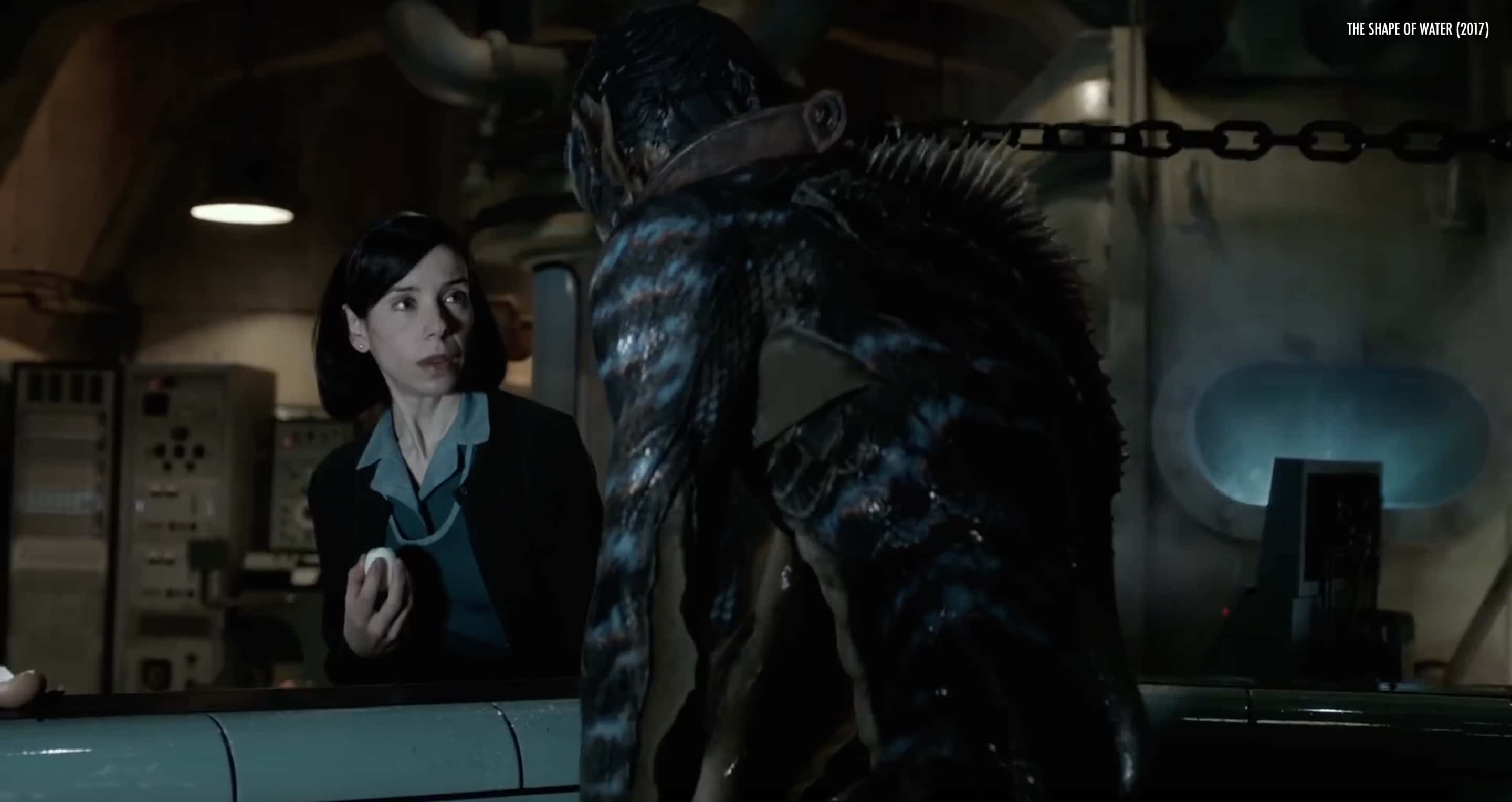 The year was 1962 when the relations between the USA and the erstwhile Soviet Republic were cold beyond repair. We follow Eliza to her workplace where she shares friendship with an affable and loquacious black woman, Zelda. They are cleaners at a scientific research laboratory. Colonel Richard Strickland (Michael Shannon) brings an amphibian man named ‘The Asset’ worshipped as a God in the Amazons locking up for observation. Even as the officials seem more interested in tormenting the creature than understanding it, Eliza seems enchanted by its sight and an endearing relationship blossoms. This seems more like Steven Spielberg’s E.T. (Extra-Terrestrial) meeting Tomas Alfredson’s Swedish film, Let the right one in.

Guillermo Del Toro does not seem subtle when he makes the American a bad guy while making a Soviet spy a hero. Doctor Robert Hoffstetler/Dmitri (Michael Stuhlberg, in Oscar limelight, having starred in Steven Spielberg’s The Post earlier) is empathetic towards The Asset and wants to preserve it while the Americans want to understand by killing and vivisecting the creature.

The surreal film is all about insignificant people finding a purpose in life to hold onto and waiting for a way to fit into the larger world. Eliza wants to hold on to her love to feel like a whole human. Giles, a creative but unemployed illustrator, is protective of his homosexuality remains unfulfilled. Zelda wants acceptance at home and at work. She admits that she lies to make her marriage work. Richard wants to climb higher up the official ranks and in the societal ladder. When his newly acquired Cadillac is severely damaged in an accident, it is metaphorical of his hurt ego and unfulfilled ambitions. The Asset feels the need to be accepted as an equal, to be loved and stay alive even when the world was against it. 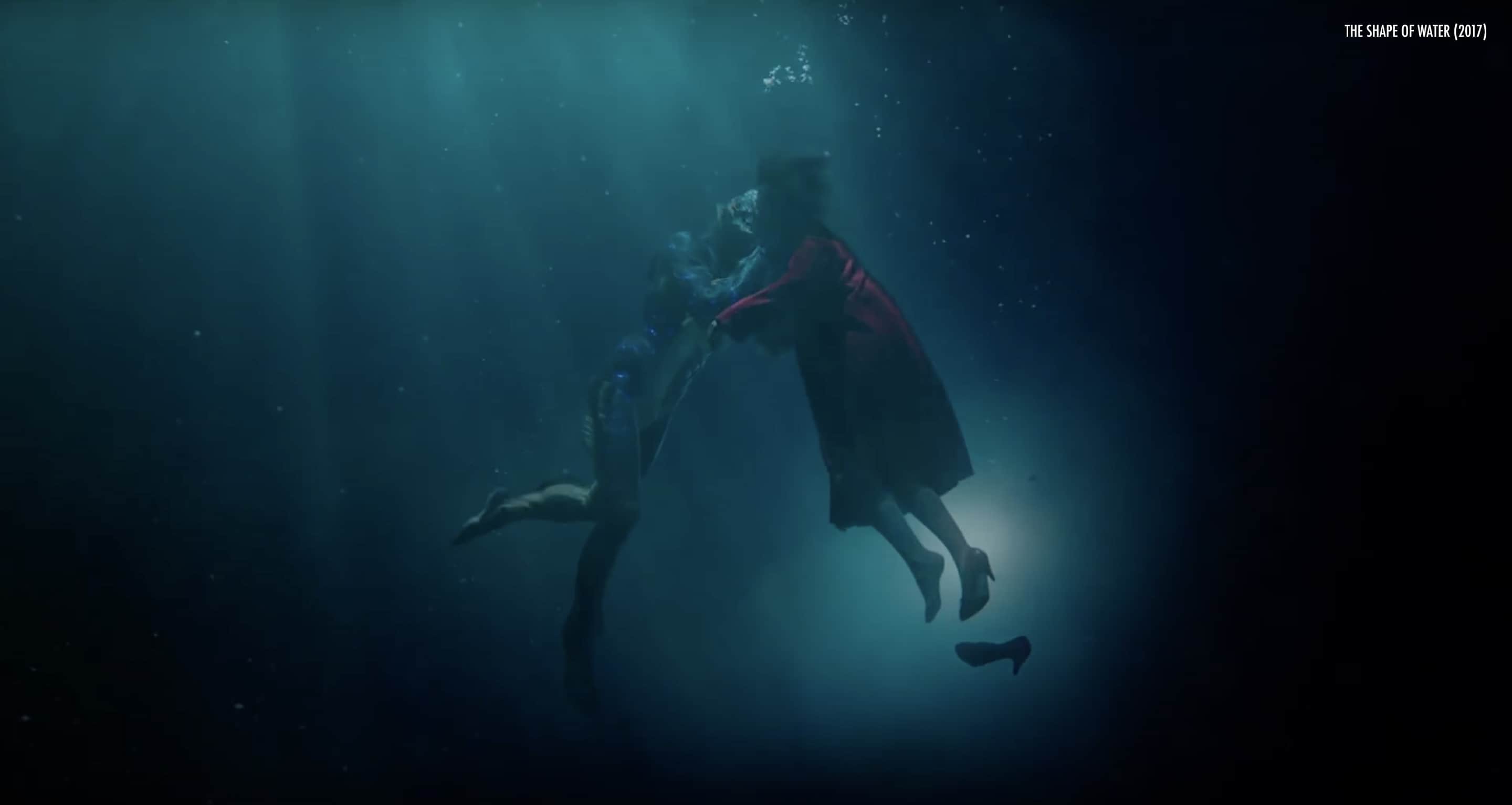 The finest moment in the film comes where Eliza tries to express her love for The Asset through a song which she cannot sing and so, escapes into a vividly imagined black-and-white romantic song. She dances with him in the imaginative world while she manages to melodiously whisper the song out loud in real. Sally Hawkins as Eliza brings life to the character and makes you desperately wanting to comfort her by voicing out messages of hope. In Giles and Eliza, she finds the support she needs. Octavia Spencer plays Eliza with a delightful nonchalance while Richard Jenkins is affable as the good-hearted Giles. Michael Shannon is menacing as Colonel Richard, be it with his piercing gaze or his army personnel gait. Doug Jones as the amphibian man or The Asset is a beast to be loved.

Dan Laustsen’s visuals are dreamy and surreal. They draw you into this escapist tour that you do not wish to exit, long after leaving the theaters. Alexandre Desplat has brought a mellifluous score that enhances the beauty of the film and is likely to be remembered for ages to come. This film thoroughly deserves each and every one of its Oscar Nominations.

Ravi Kiran cribs about the Chennai Traffic but manages to be on time for every movie show. When not staying in Satyam, he loves reading a book at home while listening to his favorite film scores. Happily works for a publishing company and loves engaging in debates over the quality of Pasta.