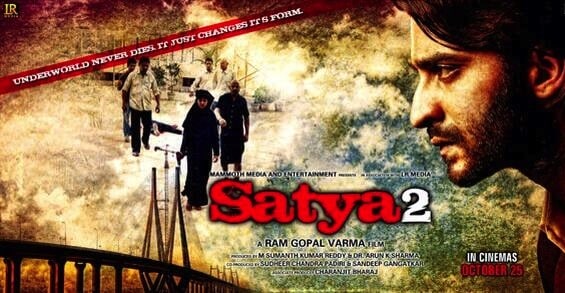 If you take the original Satya and eliminate every visible aspect of filmmaking know-how, you’d still get a better movie even if it is very similar to this quasi-sequel. Satya’s style became the backbone of dozens of crime thrillers. I would like to take this chance to have more of a discussion rather than a chalk white review. While I was watching the movie, the only thing which I wanted to do was criticise the cinematography, gossip about the storyline, intently ask questions to the theatre junta in the end that why did they come for this treat? Or was it worth it after all? I couldn’t reach a conclusion with how much water did the sequel hold. Innumerable D-Company movies like company, D, Sarkar, Bhindi Bazaar brought noir-thriller cinema a classic touch.

The characters are tough, the setting is impeccable, the dialogues hit below the belt, and the songs are not just musical lyrics and fill INS but additions to stories or extension of grit through a more melodious way. Satya 2 was different. It was weak comparatively but it had bold characters whiuch could have been sketched better if it was directed by a non-RGV idealist. With Phoonk, Agyaat, Dongala Mutha, Not a Love Story, Department, 26/11 and now Satya 2, it is clear that RGV loves to revel in the ineptness of his movies.

Satya 2 is a 2013 Bollywood crime film with production design by Saini S. Johray, directed by Ram Gopal Varma, as a sequel to his earlier blockbuster Satya.

Everybody seeks an opportunity. Phir ek mukaam. And all that to teach aukaat and conquer streets. Satya conquers the Mumbai underworld with the help of builder Lahoti (Mahesh Thakur) and sets his eyes on achieving his real aim: to be the ultimate insider-outsider and to bring the ‘system’ in his control. His sole power.

Debutant Punit Singh Ratn tries, a bit too hard, to give Satya an intriguing touch. With his gruff and beard. His beard literally squirms with anger when he is angry. Well, he touches the threshold of the ultimate gangster-goon but he misses.

B-town first-timer Anaika Soti isn’t allowed to showcase her acting talent and now I wonder why don’t we see more strong female characters who are not only strong in the booty-beauty department but the ‘system’ which the scriptwriter doesn’t stop blabbering about. Her only “achievement” would be that she got to slap the hero, “133 times” and sing-and-dance in elaborate, slow-motion shots. For the other actors who didn’t even get noticed, I have no qualms. They weren’t ‘assets’ to the story anyways. I am going to be mum about RGV henceforth.

Veerani, Satya is back, Saathi re, Control, Taqaat, Special, Palkon se…. (If you read the songs mentioned in one go you had chuckle.) Music doesn’t do anything great for RGV’s clan or the ferocious-can-be storyline. In ‘Special’, the lyricist claims that for a movie to become a hit, they must cast Salman Khan.

I still have the hate for what RGV did to Sholay when he ‘tied’ harshly to ‘remake’ it. Satya2 dies after the interval and keeps on regulating with small scrapped twists and action sequences. The movie gives you open-ended babaji ka thullu.