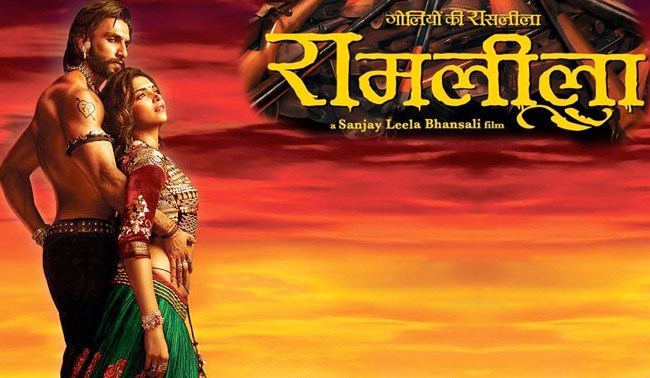 I had watched the making of all the songs which this beautiful movie encompasses and that was before I got hooked to each and every detail the film had to offer through YouTube and news. I watched the interviews, studied the settings, learnt the reason behind Bhansali’s focus on the Rajadi and Sanada community and being in Gujarat-the controversy kept my interest alive till it released today and I ran to watch the movie. When hum ‘Dil de chuke sanam’ might have released- it would have made more or less the same sensation as ram and leela did. This movie is going to stay as long as HDDCS did..

Goliyon Ki Rasleela Ram-Leela is a 2013 Hindi romantic-drama film directed and produced by Sanjay Leela Bhansali. It stars Ranveer Singh and Deepika Padukone as the eponymous leads. The film is said to be an adaptation of Shakespeare’s epic love story Romeo and Juliet, set in violent times.

Ram (Ranveer Singh) is a colourful, charming yet dramatic vagabond, and Leela (Deepika Padukone) is an unbridled and passionate village hotties. The only thing in common between these two strangers is their families’ hatred for each other. When Ram and Leela see each other for the first time, their worlds collide, wars are fought and destinies are written in blood, forever as their own kin falling in love with each other is worse than any storm that could have ever come.

Deepika is fab, wait for it-ulous. Deepika Padukone dances like a dream with the right expressions and acts so well in the movie that you shall forget all her past mistakes and regrets. Ranveer just matched his popularity and acting skills with that of every competitor in site. He learnt a new language to better his performance for the character Ram and it paid off. Though some might find the dandruff song ‘tattad tattad’ as his entry- a bit too funny and sop-it-you-ruined-it, still, the second half shows how bloody the boy can get. Strong performances from actors like Supriya Pathak, Richa Chadda and Barkha Bisht add a lot to the movie. The story line is of Romeo-Juliet and is more or less borrowed version, set up in Gujarat and unfailingly it shows the Gujarati knack for colours and garba in its truest sense. Bhansali keeps you glued to the screen and he really meant it when he once said that- my sets are as important as my actors and when I make a movie- it’s not just a movie but a story which stays. All in all, the movie is elegant and one hardly feels bored. The ending is not expected, as in a bad way and after all that happens in blood and gore- the movie doesn’t serve any purpose.

What can I say about the stream of songs which stole the limelight from every other songs or musicals at the box office. Music is by Monty Sharma and our very own Sanjay Leela Bhansali.


All the radios did these days were playing – ramleela ke gaane. “Laga de”, “dhoop”, “ram chahe leela” are classic. ‘Nagada sang dhol baje’ is out of the world and the lyrics are mesmerising. And believe me, even if you end up not liking the movies bloody plot – you will find the songs an awesome experience on the big screen. My personal favorite is ishqyaun dhishqyaun and you can find the lyrics for that here.

For all its hype, grandeur, money, blood, sweat, music, tragedy, Ram Leela is definitely worth a watch.