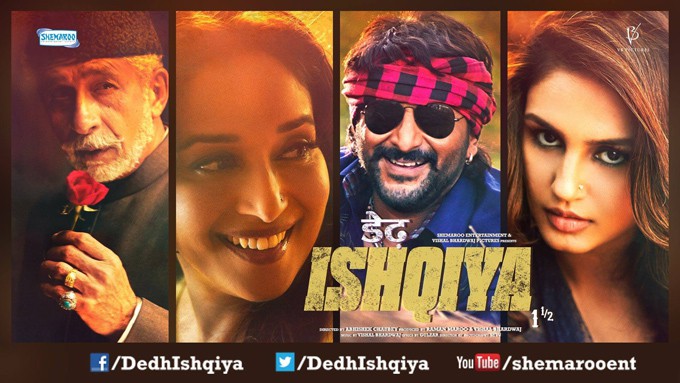 Though the woman in their lives have changed and though the wrinkles on Shah’s face has increased since last time and though the rawness of the actors has remained the same – the franchise just got better. What attracted me to pat the moviemakers? 1. I liked Ishquiya and was sure of not being disappointed and that is exactly what happened. I regained faith in sequels. 2. I have enjoyed most of Vishal Bhardwaj’s movies and this one, definitely. 3. Madhuri Dixit. 4. Naseeruddin Shah. 5. And the fact that this is one of the few movies where the lead actor’s chemistry is more worth the moolah then male-female chemistry.

Dedh Ishqiya is a Indian comedy thriller film directed by Abhishek Chaubey starring Madhuri Dixit, Arshad Warsi, Naseeruddin Shah, and Huma Qureshi in the lead roles. It is a sequel of Ishqiya and is produced by Raman Maroo and Vishal Bharadwaj.

Babban (Arshad Warsi) and Khalujan (Naseeruddin Shah) are con men when Begam Para (Madhuri Dixit Nene) announces that she will soon remarry, Khalujan shows up to try his luck, he puts a good show in front of Begam Para and manages to charm her. Babban lands up to settle old scores with Khalujan but he is soon roped in to be a part of the conspiracy. Babban has his eyes set on Munniya (Huma Qureshi), Begam’s friend and companion. To marry Begam, Khalujan has to compete with Jaan Mohammaed (Vijay Raaz) who will do anything under the sun to win Begam’s heart.

The good, the bad and the beautiful. The beautiful here is the charming Madhuri Dixit who still doesn’t show her age. While the movie is all about who is the good and the bad – both, Arshad and Shah have put their heart in their respective roles and so we can see. Huma Qureshi as Begam’s companion is outstanding. From the funny scenes in ‘Run’, Vijay Raaz has played the funny eccentric villain role in full flow and he has come up as an actor of class. While all the other crew members are stitched up to perfection – Amrtita Puri shines out.

The music is not as good as its sequel, but that is just fine. ‘Ibn-e-batoota’ was a superhit and this sequel so is. What I fail to understand is why Honey Singh is in so much demand. In all genre and kinds and in all ways. His songs are album-made not suited for a non-album star cast, yet, the mystery shall remain for now.

The shayaris are smart and so is the act. Don’t wait more and the faster you buy those tickets, happier you shall be. It’s a fact.