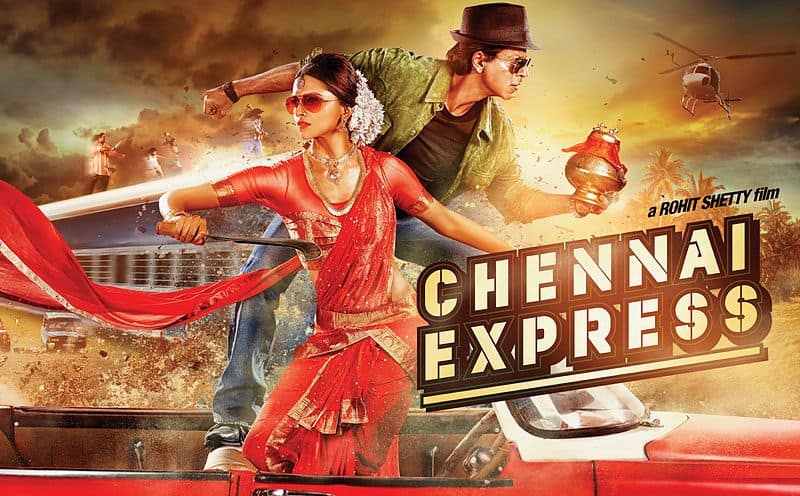 One comedy leads to another and one super hit to another. With the right amount of sandalwood and sambar, Chennai Express breeds creative comedy. A masala entertainer which you would expect from the ‘Shetty’ clan. I was disappointed with the trailer, I don’t know why and it came as a realization that sometimes the movies can be much better and interesting than the trailer. Temple run scene, the cracked a silly joke times, love and affection turning into attachment, the romantic let-the-eye-do-the-talking moments and the Tamilian backdrop in everything, Chennai Express expresses well enough.

Rahul (Shahrukh Khan) is a 40 year old more-than-middle aged charming bachelor who boards Chennai Express train that turns out to be a life changing decision for him. He tries hard to woo the South beauty Meenamma Lochni (Deepika Padukone) whom he meets. Fate plays a twist in such a way that Rahul gets entrapped with Meenamma, who is the daughter of an intimidating south don. Both Rahul and Meenamma try to elope, but every time they fail to do so and end up in trouble.

Director Rohit ‘Midas touch’ Shetty has definitely overdone humour here. Slapstick comedy at its best yet very tipsy. Talking about the king of Bollywood, well, he expresses himself as much as the full speed-ed Chennai Express. The chirpy southie angel, dips has given a fun performance but the movie mocks the souther culture and inhabits an accent and flow of actos through the movie which wouldn’t be appraised by southies much. (Now why am I focusing so much on the so called racism! :P) Coming back to the center of attraction of the movie, Deepika plays Meena Amma with flavorful flourish. She is especially delightful in three key sequences, two of them comic and the other unexpectedly sombre. Nikitin Dheer does justice to his villainous act, while South star Sathyaraj doesn’t get much opportunity to prove he in the film. ‘Brand Shahrukh Khan’ can be seen in every failure or mistake the film makes. SRK can cover up all those notches and nuts which have fallen apart in a Veer Zara romance with DDLJ settings and ‘Om Shanti Om’ pairing. The cinematography is brilliant. The screenplay is rubbish but that is when you apply brain.

The songs have a southern tinge to them. With lots of Tamil words and even though, the song “One Two Three Four.” was a radio hit, the others are saliently good to the ears but not much. ‘Titli’ is beautiful.

The good news first. “Chennai Express” is a pleasantly likable film in parts and it has a good dose of comedy. The bad news is, it does nothing for Shah Rukh Khan’s indomitable star power except to tell us he can still play a 40-year Rahul without faltering. Rest assured, it doesn’t settles in as another Shetty comedy but rather SRK parody. Board this train, I say and keep your expectations to what the trailers did (not what SRK crazy bing boing fans told u after the movie! believe me, SRK can make shit and fans are going to love the shawarma). RATING: 3/5