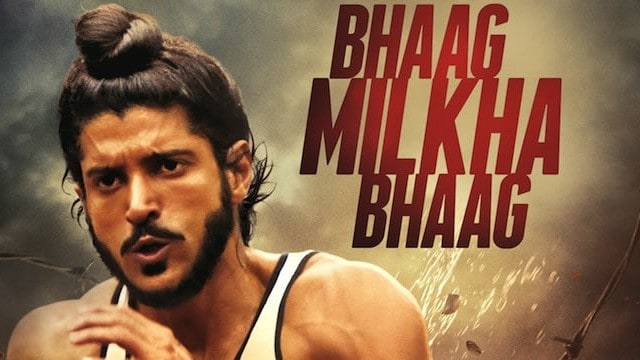 Dekh milkha dekh. Woh jo cheetah ki tezi se bhagta hai aur thakta nahi hai na thakne deta. Well, this isn’t any dialogue or narration but my own words. And God forbid but my Hindi has become quite bold for a day since I watched this biopic. It has an overdose of reality. It’s too real. And dramatic. You will feel like blabbering audacious and dauntless phrases even after Milkha has ran his run. From a care-free life in Pakistan, to the tough teen days in Delhi, to his rise in the Indian Army, Mehra chalks Milkha’s trajectory.

Bhaag Milkha Bhaag (English: Run Milkha Run) is an Indian biographical sports film based on the life of “Flying Sikh” Milkha Singh an Indian athlete who was a world champion runner and an Olympian.

A story which could have been lost easily in historical depths gets a cinematic depiction of brilliance with the story of an extraordinary athlete, Milkha singh (Farhan akhtar). This is a biopic. Imagination has no place while reality rules. India and Pakistan is again showed in the negative census which it has graced till now and how an athlete changes relations, trust and loyalties.

I don’t know how fast Milka ran, but Farhan’s Milkha doesn’t fake it for even a second. I could never have thought of praising somebody’s running capability in movies at least. But here is our own Usain bolt. Farhan Akhtar will be remembered as one of the most hardworking and make believe actor after Milkha’s story unfolded as one had hoped it would. The first half sets the pace while the race is ran in the second course, where everything happens too fast but it’s amazing how wonderfully the niche for success is carved by Rakeysh Om Prakash Mehra.

The dilly dallying Sonam Kapoor just adds a swift reminder of the movie being Bollywood-ish with sing-songs and her sharmata hua simplicity. There are so many supporting actors that talking about each would surely take me back to watching the movie. So engrossed was I with Farhan’s acting prowess that I simply grazed through any other actor, may he be shouting his guts out or she be crying her heart out. The movie has one of the awesome screenplays and the direction which wins you over. But, it clocks 3 hours eight minutes. Which is just too much! There are unnecessary scenes with too many songs which the film could have been better without. Another guy who needs credit is Prasoon Joshi. Hats off to you.

Javed bashir’s ‘mera yaar’ is jolly good and ‘zinda’ is the energy anthem of the year. Yes. All other songs and background music are average.

Apart from the flashbacks which have become too mainstream with age, I found the drama a realistic version of depressed India-Pakistan relationship in the backdrop of personal issues of Milkha. The movie packages in its outstanding length, a healthy amount of entertainment and the biopic turns from enjoyment to a funeral in seconds at times.

Maybe the movies seem blown out of proportion in terms of emotions and workout to achieve success on the run but I assure you, it will be a pleasure. After all, you can at least watch the movie for none other than Farhan Akhtar, who is definitely flying high on screen success that I assure you too. And why not fly? 😉 RATING: 4/5