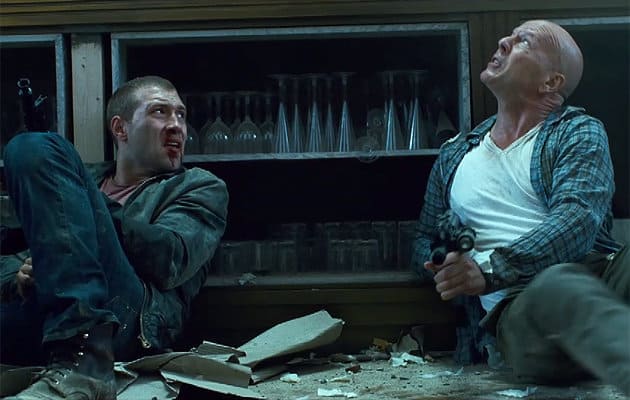 A Good Day to Die Hard (2013) Review: An American action film directed by John Moore and written by Skip Woods. It is the fifth instalment in the Die Hard film series. Starring Bruce Willis.

Watching Bruce Willis, bonding with his son made me feel a bit ‘Bollywood’. Emotions rule a greater deal of die hardness. Emotions are even flayed badly between undesirable adrenaline pumping by the cinematographer and stuntmen of ‘A Good Day To Die Hard’. Bruce looked old. Really old. Yet, fit and hit.

While I was sure about the story-failure (oh come on! all the story of chase and gun and die has been already told with different perceptions in the prequels with lot of panache), I was given a substitute winner-the action sequences are totally flawless.

Jack McClane (Jai Courtney) is arrested for an assassination to testify against Komarov (Sebastian Koch), incriminating political prisoner and government whistleblower for a shorter sentence. John McClane (Bruce Willis), a former police officer and detective on a “vacation” (with his fifth instalment) who has not been in touch with his son for years goes to Russia to save the son-in-distress. With an explosion to greet him, henchmen, led by Alik (Radivoje Bukvić), chase the father son all around Moscow. from there on stealing, chasing, firing, bombing, betraying, helicopter crashes, and never-ending gun fights, but it’s all such a blur because it has a videogame-like monotony to it. AND bonding between the father son starts….time for another die hard flick which is abundantly kill-and-run. Aside from the typical jokes about McClane’s ageing, there’s little else that’ll make you smile here. The onscreen rivalry of Willis and Courtney was “more irritant than enticement”.

Bruce Willis as John McClane will always be irreplaceable. He is ultimate action hero, somehow. This movie is a bit slow on characters development but, again, with the already established franchise, dying the death of dogs is a certain agenda here. Jai Courtney delivers a good performance. But he cannot be as good as his father. Period Sebastian Kochas the main antagonist is interesting and as threatening as Crime Master Gogo. Somehow his lines, screen presence is heavier than Bruce’s. Mary Elizabeth Winstead as Lucy McClane, McClane’s oldest child has a little to show off. The CIA operatives and NYPD’s are all as expected and sometimes the same scene and rush as seen before, makes the movie dull but the guns and calibres’ just keep you on an adrenaline rush.

Moscow is beautifully pictured and if not for blood on every scene, you had wanted to visit the places for their sheer soberness. Marco Beltrami has given a monotonous background kill. His music ceases to impress. Again, this isn’t Bollywood, where music and dance matters more than the story, sometimes. I was hugely disappointed by the wit and scheming of John Moor’s writing. Other Die hard’s were anything but this. The entire movie feels as though Bruce is going through the motions while working out how to spend whatever exorbitant pay check Fox threw his way to make this film. Diehard fans should not mind but. The action sequences are beyond a doubt breathtaking. This film is basically Rohit Shetty on steroids.

As an action flick lover, I had want to go watch this 5th Die Hard in the nearest theatre but be open to whatever disappointments are thrown my way or as a not–so-enthusiastic action craver, I had get a DVD and check Bruce out on some rainy day when I have nothing else to do. All the all, it doesn’t matters much. A huge applaud goes for the moviemakers and the die-Harders to be still up with the FIFTH.