When Pariyerum Perumal was initially released in 2018, many major theatres in Tamil Nadu were reluctant to screen it. Although the movie eventually went on to receive critical and popular acclaim, and more screening, it was initially only released on 121 theatre screens due to the ‘sensitive’ nature of the film.

India’s problem with caste is a peculiar one. On the one hand, there seems to be a silent agreement to never explicitly mention caste in the public forum. Barring some fringe political parties and independent artists, anyone who brings up caste is branded as being divisive. Many upper caste sections of society are raised with the idea that India is in a post-caste era, while simultaneously indoctrinating casteist practices like using separate plates for household help.

On the other hand, DBA communities continue to be exploited, denied access to education and social advancement, and treated as second or even third-class citizens. The shadow ban on DBA artists only worsens the situation; when the more implicit forms of caste discrimination are never discussed, they are easier to ignore in public and practice in the shadows.

Pariyerm Perumal was one of the first movies to break through this glass ceiling and enjoy mainstream success. Not only is it a gripping story, but every second of the movie is also jam-packed with meaning and symbolism that reflects the real lives of oppressed communities in Tamil Nadu. Even the movie’s title and its protagonist’s name Pariyerum Perumal is a sardonic nod to caste hierarchies. Meaning ‘The God who Mounts a Horse’, the name is in stark contrast with the lived experiences of the character.

*Spoilers ahead from this point on. If you haven’t seen Pariyerum Perumal yet, the movie is currently streaming on Amazon Prime.*

While most movies we’ve seen have a slow build – exposition, rising tension, and a sometimes violent climax – Pariyerum Perumal opens with a punch to the gut. Pari and his brethren are tormented by upper caste men who do horrible things just to establish their caste superiority. One of the first shots of the movie shows the largely barren land the Pariyan community lives off of; yet they are unable to do anything but watch as upper caste men urinate in the only water source around. This is contrasted with the story of a pariyan boy murdered for simply swimming in a public pond, and the disparity could not be more obvious.

One of the most crucial moments of the film occurs fairly early. With not many avenues of earning a living available to them, Pari and his friends train hunting dogs to catch prey. Pari especially is very attached to his dog Karupi, meaning ‘blackie’ in English. But one day, when he was less vigilant, Karupi is kidnapped by the same upper caste men and tied onto the railway tracks. Horrified, Pari races to save her, but Karupi is run over by a train, her guts spewing all over the tracks.

Karupi is a symbol in more ways than one. Her name is a reference to the rampant colorism in India, where the fairer you are, the more beautiful you are. It is also not a coincidence that fair-skinned Indians are typically from upper castes and dark-skinned Indians are typically from lower castes. Her murder, callously committed just to agonize a Dalit man, is a symbol of the way the killings and abuse of DBA communities are treated as a sport.

Inspired by Karupi’s death and the way his community is brutalized by the police, Pari decides to go to law school and become the next B.R. Ambedkar – Indian history’s most famous Dalit historian, writer, activist, and policy maker. There is a common assumption that education is India’s great leveler of caste. No matter if someone comes from an affluent caste or an oppressed caste, once they have been educated, they have equal opportunities for success.

Pariyerum Perumal debunks this myth and minces no words. From the moment Pari arrives on campus, he is bullied for his caste, especially by his future love interest, Jo’s brother. Although a gifted student, Pari realizes that the mode of education being English prevents him from actually learning anything. English medium schools are typically private schools, a luxury that is mostly reserved for the affluent. Without a prior education in English, which his socio-economic status denied him, Pari’s education is essentially useless.

In his attempts to learn English, Pari befriends Jo, an upper caste girl who is clearly oblivious to the caste dynamics around her. As their friendship progresses, Jo invites Pari to her sister’s wedding, where he is drawn away by Jo’s brother to be beaten and urinated on by him and his peers. Traumatized by this episode, Pari becomes disinterested in his studies and distances himself from Jo. When he innocently sits in Jo’s brother’s seat, he is locked in the girls’ restroom just to be humiliated. Some of the upper caste staff in the college chalk up the incident to bullying, but the Dalit headmaster knows better – Every cruel violent act Pari endured was to remind him of his ‘place’.


Jo’s innocence is a two-fold phenomenon. On the one hand, as an upper caste woman, Jo has never faced the barriers to education Pari has faced and is unable to understand his perspective. On the other hand, the realities of caste are deliberately kept from her by her father and brother because she is a girl. In caste conflicts, women are only pawns and vestiges of honour for the men to ‘protect’. She never learns of the violence inflicted on Pari or of her father and brother’s true nature even by the end of the movie. But it is important to note that even though Jo does not see caste, her position in the hierarchy is firmly maintained.

Finally, perhaps one of the most shocking characters is that of Thatha Maistry – a Dalit man who carries out honor killings for a price. His character shows that caste conflict is not as simple as Dalits vs. Non-Dalits. The idea of caste hierarchies is internalized even by members of oppressed castes, and the problem is pervasive. SC castes feel a sense of caste pride over communities supposedly lower on the hierarchy than they are.

So where does Pariyerum Perumal stand? Pari is the antithesis of the Dalit success story. For every Dalit person that manages to become Ambedkar or the headmaster of a law school, hundreds of Dalits are either denied entry or abused to the point of giving up. Despite what we’d like to tell ourselves, we are a long, long way from caste being a thing of the past. 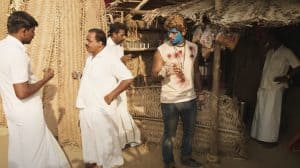 A final year law student from Chennai with an interest in policy, debate, and dogs.