Fugly (2014) Review: The trailer was stretched and it had a zeal to it which we knew the youngsters shown in the movie wont be able to suffice to. There is a dying need to resurrect the movie and at points you get giddy about everything – the jokes are really bad, the dressing sense is turbulent and the dialogues are showy and thrifty. It begins with a hint of promise, and it could have gone down some paths less traveled. But it meanders, and loses its way. But it has a lot of hard work put in it to make it look upcoming inspiration for message borne movies. It waves through friendship, adventures and ultimately departs leaving behind an important social message. The drama quotient is definitely more than comedy, but that helps the movie. 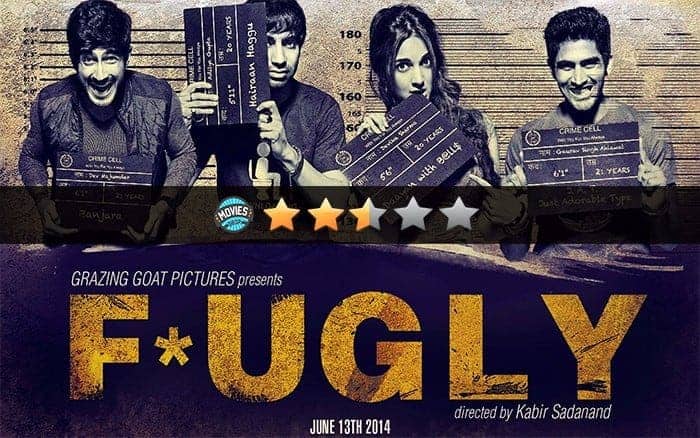 Honey singh overdosing these days in Bollywood movies, make him stop somebody. I had like to enlist why Fugly is GREAT – it is positive, it has immensely strong supporting cast, it is worth the dime for all the bigdel kids of Delhi who believe that a political connection is good enough reason to fight their way anywhere, last but not the least- the title track explains the gist of the movie and it is awesome.There are many scenes in the film, which remind you of Rang De Basanti. And that’s when one the comparisons begin, which is bad, sad and frivolous.

Dev, Gaurav and Aditya (Mohit Marwah, Vijender Singh and Arfi Lamba respectively) and Devi (Kiara Advani) are BFFs who fall in a tiff with a bad bad cop and that results in bad bad moments with lies, deceit, love and run away and kidnappings and what not. So basically, by the time the movie ends- you have had so much of active sessions of all criminality of IPC that you just want to go back and live your normal life. Sadanand shows us the shocking reality of the administration system of our nation. And he does it brilliantly. There are numerous social issues like gay-prostitution, excess of television journalism that Sadanand tackles in just 2 hours. Milind Joga’s cinematography compliments it well with the depiction of Delhi and Gurgaon spot on.

The title track. One word – Mind-blowing! There are other swift young and tacky ones.

Youngsters should not miss it and there are reasons which can be best explained by the social layers which the movie encompasses. There are scenes which make it worth your time and excitement (If you have) but than it is flawed because it is based on Bollywood logistics.

Holiday (2014) Review: How do you review Akshay Kumar's Movies? You don't. You criticize and you tickle the bad spots in the movie but you...